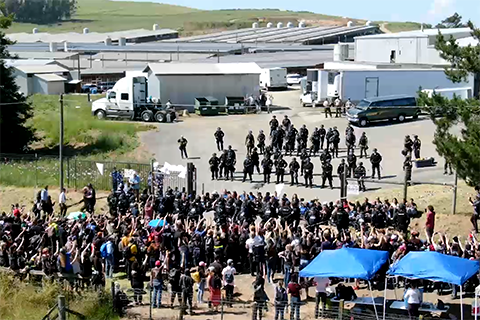 On June 3, over 600 activists with the animal rights network Direct Action Everywhere (DxE) occupied Reichardt Duck Farm in Petaluma, a massive duck slaughterhouse. More than 75 were arrested, including the group’s co-founder, Wayne Hsiung, who has now accumulated 17 felony charges in Sonoma county and around the country in an effort to defend the legal right to rescue animals in court. Many of the arrestees locked their necks to the slaughterhouse shackles, gate, and other machinery. Activists also removed 32 ducklings and rushed them to emergency veterinary treatment. The rescued ducks were transported to farm animal sanctuaries for lifelong care.

The facility, which slaughters over 1 million ducks annually, has been the subject of numerous reports of animal cruelty, including birds with gaping wounds collapsed on the wire floor. Despite these complaints — and damning opinions by a prominent veterinarian and a former federal prosecutor — local authorities have failed to take action against the company. The activists, who donned veterinarian-approved biosecurity gear as they entered the facility to give aid to sick and injured animals, say their actions are a necessary response to a pattern of corporate and government misconduct.