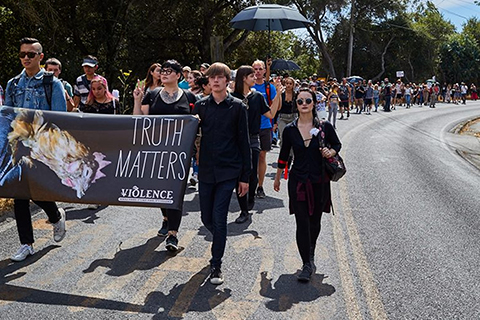 Responding to undercover video footage of cruelty, activists with the international animal rights network Direct Action Everywhere (DxE) marched to a Petaluma factory farm which supplies eggs to Whole Foods on July 30. Citing evidence that chickens were starving, cannibalizing one another, and suffocating in feces, the activists asked to be allowed to bring the chickens water and food, and to remove those in need of medical care. Over twenty police officers and Sonoma County sheriff’s deputies were present to deny protesters access to the facility.

Chanting and laying down white flowers, the activists held a ceremony to honor the uncounted animals who have died within the walls of the farm. Continuing to chant and sing, they then marched five miles to the Petaluma Whole Foods location, which sells the farm’s eggs bearing animal welfare labeling. In front of the supermarket, speakers sought to alert well-intentioned customers about mislabeled products and the lack of accountability in labeling standards, and to encouraging them to “seek out the truth for themselves.”