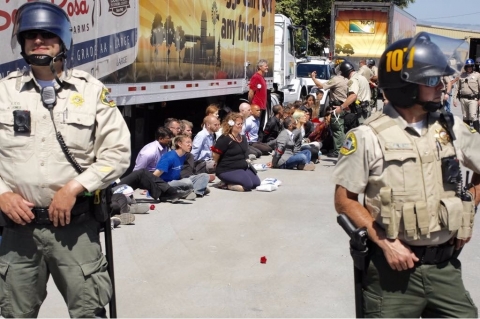 Thirty-nine people were arrested on May 29 after approximately 500 animal rights activists organized by the Direct Action Everywhere (DxE) network staged a non-violent vigil in defense of caged and tortured chickens. The group was attempting a rescue operation at Sunrise Farms, an industrial egg facility in the town of Petaluma, California. They say they took the action to highlight both corporate and government inaction in the face of animal cruelty.

Marching outside the farm entrance carrying flowers and denouncing the "horrific cruelty" they say takes place within the facility, the group was confronted by local police who barred them from entering and later arrested those who tried. The group cited evidence that Sunrise Farms — one of the region's largest egg farms and which provides eggs to Amazon-owned Whole Foods grocery chain — is keeping the birds in cruel and unhealthy confinement.

DxE co-founder Wayne Hsuing — already facing the potential of decades in prison for previous investigations and similar rescue operations — and dozens of other activists were arrested by local law enforcement after they attempted to enter the farm and access one of the industrial chicken sheds to document conditions and demand the transfer of sick or mistreated birds to the city animal shelter.

Hundreds Rally, Dozens Arrested in Effort to Save Chickens from Horrific Cruelty |