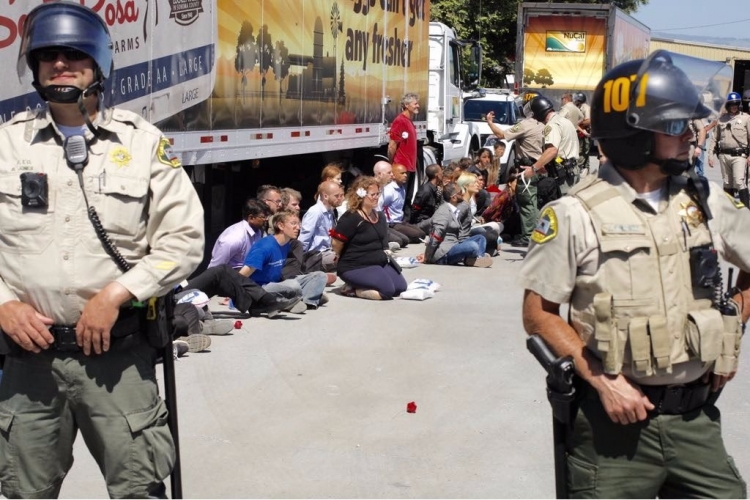 May 29, 2018, Petaluma, California– Over 500 activists with the grassroots animal rights network Direct Action Everywhere (DxE) executed a vigil and sit-in inside an industrial shed at Sunrise Farms in Petaluma, citing grisly undercover footage of rotting birds at the cage-free egg supplier to Amazon and Whole Foods. The activists, empowered by a legal opinion by a criminal law scholar, claimed they had the right to enter the facility to care for sick and injured animals. Petaluma authorities disagreed, arresting 39 activists in biosecurity suits during a dramatic confrontation inside a massive industrial shed. The activists, who have accumulated evidence of criminal animal cruelty at California factory farms over the past 5 years, say they took the action to highlight both corporate and government inaction in the face of animal cruelty.

“Americans do not want to see animals exploited in our food system,” former Northwestern law professor and DxE co-founder Wayne Hsiung said. “But when we have gone to authorities or corporations like Amazon with absolutely horrific footage of cruelty, no action has been taken.”

Hsiung, who faces up to 60 years in prison for prior investigative work, was one of hundreds of activists who walked onto the farm, holding flowers in their hands. The activists, who donned veterinarian-approved biosecurity gear, entered one of the industrial sheds to document conditions and demand the transfer of animals to the city animal shelter. 39 were arrested for trespassing. 37 chickens were removed and taken to receive veterinary care.

“These birds are living creatures, not things, but Amazon and other major retailers treat them like commodities,” DxE lead investigator Priya Sawhney said. “Whether it’s foie gras or fur or factory farms, Amazon is shipping cruelty into millions of households across the world.”

DxE is calling for Amazon and local government officials to take immediate action to provide transparency in the sale of meat. Seizing on momentum from the recent ban on the sale of fur in San Francisco, they have proposed legislation that would require warning labels on animal products. The activists, many of whom participated in a recent animal rights conference featuring transparency advocate Glenn Greenwald, say transparency is crucial to building a food system with integrity.

“When Americans see what’s happening behind the doors of factory farms, they know it’s against their values,” Hsiung said. “But as long as corporations control our food system -- including sending whistleblowers to prison -- we won’t have a food system with integrity. Today’s action will chip away at their power.”

Investigators with Direct Action Everywhere (DxE) enter farms, slaughterhouses, and other agricultural facilities to document abuses and rescue sick and injured animals. DxE’s investigatory work has been featured in The New York Times, Nightline, and a viral Glenn Greenwald exposé, and DxE activists led the recent effort to ban fur products in San Francisco. Activists have been subjected to FBI raids and felony prosecutions for these investigations and rescues. Visit Direct Action Everywhere on Facebook and at directactioneverywhere.com. Follow us on Twitter @DxEverywhere. 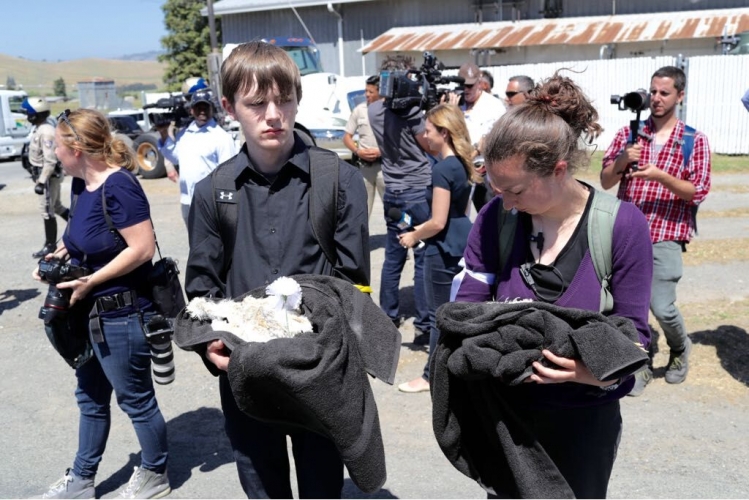 original image (1024x683)
Animal liberation now!
https://www.directactioneverywhere.com
Add Your Comments
Support Independent Media
We are 100% volunteer and depend on your participation to sustain our efforts!