Add an Event
Newswire
Calendar
Features
Home
Donate
From the Open-Publishing Calendar
From the Open-Publishing Newswire
Indybay Feature
Publish to Newswire
Add an Event
Related Categories: North Bay / Marin | Animal Liberation | Police State & Prisons
Hundreds Rally, Dozens Arrested in Effort to Save Chickens from Horrific Cruelty
by Common Dreams (Jon Queally)
Wednesday May 30th, 2018 9:44 AM
A crowd organized by Direct Action Everywhere, an animal rights network, protested the conditions and welfare of the chickens at Sunrise Farms on May 29 in Petaluma. 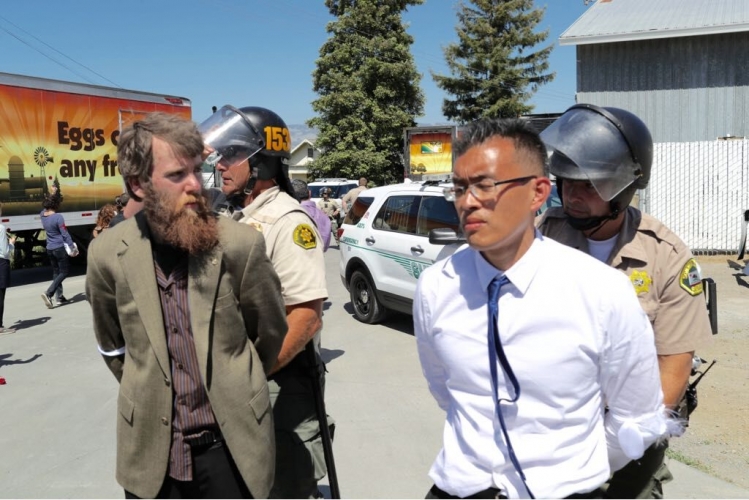 
Thirty-nine people were arrested in California on Tuesday after approximately 500 animal rights activists organized by the Direct Action Everywhere (DxE) network staged a non-violent vigil and attempted a rescue operation at an industrial egg facility in the town of Petaluma.

"These birds are living creatures, not things, but Amazon and other major retailers treat them like commodities," [said] Priya Sawhney [of] DxE.

Marching outside the farm entrance carrying flowers and denouncing the "horrific cruelty" they say takes place within the facility, the group was confronted by local police who barred them from entering and later arrested those who tried.

The group cited ...video footage as evidence that Sunrise Farms—one of the region's largest egg farms and which provides eggs to Amazon-owned Whole Foods grocery chain—is keeping the birds in cruel and unhealthy confinement.

"Americans do not want to see animals exploited in our food system," former Northwestern law professor and DxE co-founder Wayne Hsuing said. "But when we have gone to authorities or corporations like Amazon with absolutely horrific footage of cruelty, no action has been taken."

Along with Hsuing—already facing the potential of decades in prison for previous investigations and similar rescue operations—dozens of other activists were arrested by local law enforcement after, according to the group, they attempted to enter the farm and access one of the industrial chicken sheds to document conditions and demand the transfer of sick or mistreated birds to the city animal shelter.

http://commondreams.org/news/2018/05/30/hu...
Add Your Comments
Support Independent Media
We are 100% volunteer and depend on your participation to sustain our efforts!