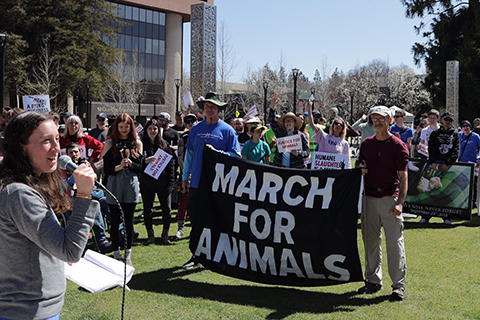 Over 170 activists with the animal rights network Direct Action Everywhere (DxE) marched through downtown Santa Rosa on March 30. The crowd chanted as they walked, beginning at Old Courthouse Square, with several stops for singing and speeches, before concluding at Santa Rosa City Hall.

The march highlighted what activists call criminal animal cruelty on factory farms throughout Sonoma county, which has been reported to local authorities. No enforcement action has been taken. Authorities have, however, prosecuted activists who have investigated the farms, with six currently facing seven Sonoma county felony charges each.

“The citizens of Sonoma county support animal rescue, not animal abuse,” said DxE press coordinator Matt Johnson. “We call on District Attorney Jill Ravitch to represent the will of the people, not the powerful.”