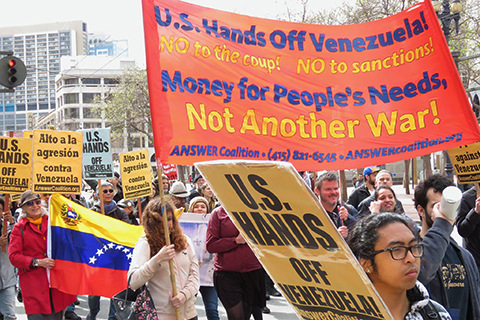 Venezuela has been in the crosshairs of U.S. imperialism since 1999 when then-president Hugo Chávez began implementing socialist reforms using the country’s vast oil wealth to fund social programs lifting millions out of poverty. Upon the death of Chávez on March 5, 2013, Nicolás Maduro assumed the powers and responsibilities of the president. In April 2013, Maduro was elected President. Maduro has been accused of authoritarian leadership and his second inauguration on January 10, 2019, was widely condemned.

On January 22, U.S. Vice President Mike Pence made a phone call to opposition politician Juan Guaidó, essentially offering him the presidency of Venezuela. The next day, Guaidó swore an oath in which he appointed himself "Interim President of Venezuela." Minutes later, Donald Trump officially recognized that self-appointment, in effect instigating a coup against the Bolivarian government of Nicolás Maduro. Since then, many corporate media outlets have been supporting a coup, flooding the air waves and Internet with stories about chaos, poverty, corruption, and violence in Venezuela, exclusively covering anti-government marches, and showing clips of world leaders calling for the overthrow of the Venezuelan government.

On Saturday, March 16, thousands of people marched in Washington, D.C. against the Trump administration’s effort to engineer a coup in Venezuela:

National March on Washington: Hands off Venezuela! No coup, no sanctions, no new U.S. war!

Study Group: The Truth Behind the U.S. Attacks on Venezuela (Feb 16) |