National March on Washington: Hands off Venezuela! No coup, no sanctions, no new U.S. war! 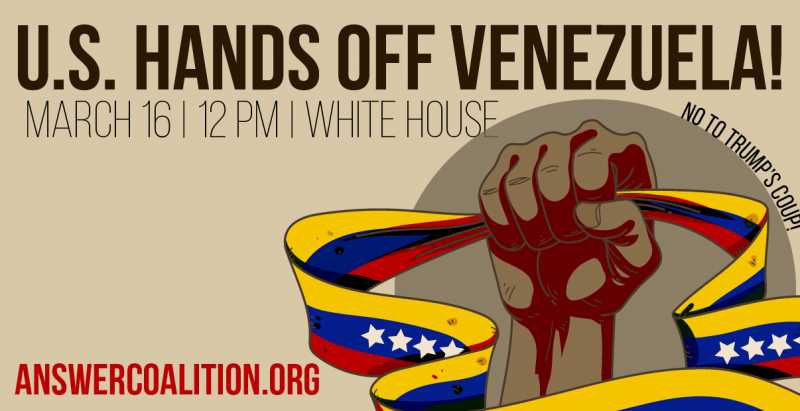 Import event into your personal calendar
Date:
Saturday, March 16, 2019
Time:
12:00 PM - 3:00 PM
Event Type:
Class/Workshop
Organizer/Author:
ANSWER
Location Details:
White House
1600 Pennsylvania Ave
Washington DC 20500
On Saturday, March 16, thousands of people will march in Washington, D.C. against the Trump administration’s effort to engineer a coup in Venezuela and a new devastating war there. The aggressive policy against Venezuela repeats the ugly pattern of wars for regime change in the oil-rich countries of Iraq and Libya. National Security Advisor John Bolton is reading from the same script, declaring a “troika of tyranny” in Latin America (like the “axis of evil”) as a precursor for regime change first in Venezuela, and then Cuba and Nicaragua. Trump has always said that the “mistake” of the Middle East wars was that the U.S. didn’t “take the oil.”

It is time to stand up and with a clear voice say NO to the newest example of the “Monroe Doctrine,” which the U.S. government has used for over two centuries to repeatedly invade Latin America and Caribbean, control its politics and extract its resources.

The White House aims to overthrow the government of President Nicolás Maduro and replace him with Juan Guaidó. Guaidó is a U.S.-trained operative who was unknown to the vast majority of Venezuelans before he proclaimed himself president — at Vice President Mike Pence’s urging. Although Guaidó has the backing of Trump, the CIA, and the Republican and Democratic Party leaderships alike, huge numbers of Venezuelans have marched to reject this coup and defend their independence.

On March 16, the people of the United States will come together to say:

U.S. hands off Venezuela!
NO to the coup — the U.S. does not have the right to select other country’s leaders!
NO to the sanctions, oil embargo and economic war on Venezuela that aims to cause suffering for ordinary people in the country.
NO to intervention and war from the U.S. and their proxies in the region

Donate to the march, and help cover thousands of dollars of up-front printing and transportation costs. 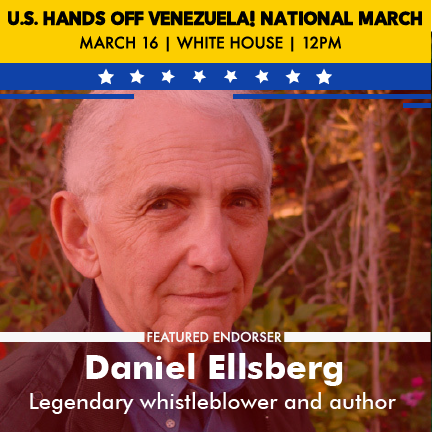 CONFIRMED SPEAKER : Daniel Ellsberg at the March 16th #handsoffvenezuela demo at 12PM in front of the White House Ellsberg is a legendary whistleblower who revealed the Pentagon Papers and acclaimed author.
END_OF_DOCUMENT_TOKEN_TO_BE_REPLACED
Add Your Comments
Latest Comments
Listed below are the latest comments about this post.
These comments are submitted anonymously by website visitors.
TITLE
AUTHOR
DATE
Gloria LaRiva Video on Public Housing in Venezuela
Register Peace & Freedom or Green
March 16 Signers
ANSWER
Support Independent Media
We are 100% volunteer and depend on your participation to sustain our efforts!