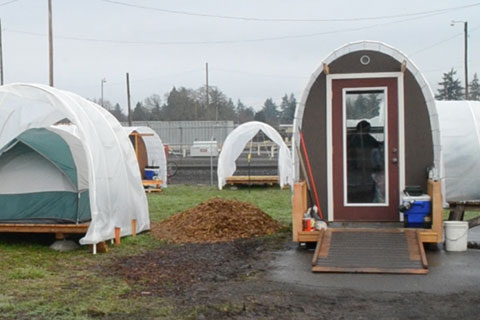 On Tuesday, March 12 at 7pm, the Santa Cruz City Council will decide how to proceed on the establishment of transitional homeless encampments and safe parking locations within the city. Despite the giant presence of anti-homeless community members at the previous meeting on February 26, council members voted to remove the closure date of the Heroes Camp, a large homeless encampment between Highway 1 and Gateway Plaza, until more shelter options are made available to its residents. Heroes Camp is also known as Ross Camp or Gateway Plaza Camp.

On February 26, the City Council directed city staff to return on March 12 with a comprehensive list of possible city-owned locations for transitional encampments and safe parking locations (see photos), and with ordinance language for both transitional encampment permitting and safe parking programs permitting. City staff was also directed to share information with the county to encourage a collaboration to pursue a wider range of locations. Earlier in February, when the Heroes Camp was slated for closure by officials, community members announced they intended to establish an emergency survival camp.

Keith McHenry writes: It is time to stop talking and start implementing compassionate solutions for those who live outside. You are invited to join our nonviolent direct action campaign to form stable living conditions for people who cannot afford housing in Santa Cruz. Community members plan to form an emergency survival camp in one of the downtown parking structures. We have started a GoFundme campaign to raise money to pay any bail and fines that survival sleepers might receive if the authorities interfere with the camp.

Beat Back the Bigots |