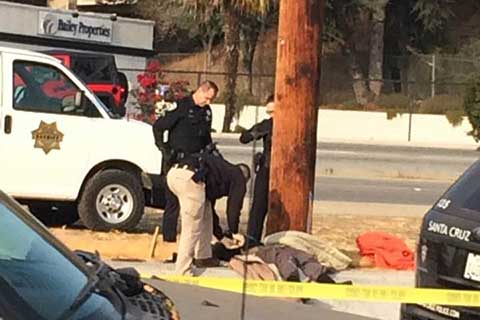 Dead Man Pulled from Culvert in Santa Cruz
How Many More Homeless People Will Die This Winter?

Robert Norse writes: "On Saturday morning, I saw several police officers and a deputy examine what appeared to be a dead body behind a yellow "crime scene" tape at the edge of a culvert adjoining Highway 17 near the Plymouth/Highway 17 stoplight.

"Jim, a nearby homeless man, said he'd been watching the body retrieval operation for an hour. He said he'd seen the law enforcement people raise the body from the culvert covered with a yellow tarp. He also said that Coroner/Sheriff Jim Hart had been present.

"I notice there was no mention of this in the Sunday Sentinel nor in their online edition, even in the "police log" section dated 2 p.m. November 17. Considering the cold weather of the last few days, it's quite possible the man died from hypothermia. The closure of the River St. campground as well as all the parks aggravates the situation for those outside."