Add an Event
Newswire
Calendar
Features
Home
Donate
From the Open-Publishing Calendar
From the Open-Publishing Newswire
Indybay Feature
Publish to Newswire
Add an Event
Related Categories: Santa Cruz Indymedia | Health, Housing & Public Services
This is a Homeless Emergency
by Keith McHenry
Friday Feb 15th, 2019 10:44 AM
It is time to stop talking and start implementing compassionate solutions for those who live outside. You are invited to join our nonviolent direct action campaign to form stable living conditions for people who cannot afford housing in Santa Cruz. Community members plan to form an emergency survival camp in one of the downtown parking structures. We have started a GoFundme campaign to raise money to pay any bail and fines that survival sleepers might receive if the authorities interfere with the camp. 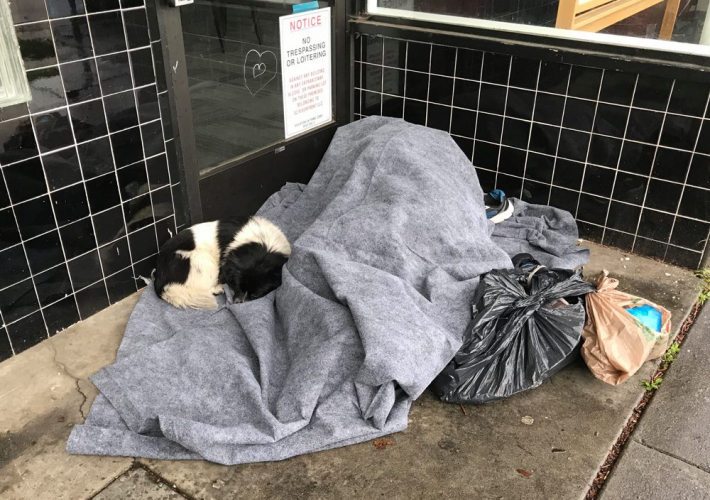 original image (1000x704)
In the hopes of a human response to the crisis caused by the closing of the River Street Camp and reduction in shelter space and facilities a meeting was held with city councilors Chris Krohn and Drew Glover, their interns, local unhoused people, vehicle dwellers, members of HUFF, Conscience and Action and residence of the Ross Camp. The group spent hours drafting a realistic humane set of proposals to present. Councilors Brown, Glover and Krohn asked mayor Martine Watkins to place the proposal on the February 12th City Council meeting. The proposal included:

Councilperson Glover encouraged the community to support this real change in direction posting, “we have been idle for too long when it comes to progressive, compassionate policies. Join me in the fight for equity, justice, and unconditional love!

The mayor refused to place these proposals on the February 12th meeting agenda and instead calendared the business community’s agenda before the council. The City Manager’s proposal featured inadequate or non-existent services. The only concrete action in their proposal was the immediate closure notice for the Ross camp--a move that would eliminate shelter and increase suffering.

Millions of dollars have been spent on local homeless programs that rarely help those who live outside. We have watched the council announce one wish list of solutions after another that they never implement with the purpose of justifying the criminalization of those without housing. The February 12th council vote serves to justify the closing of the camp and seeks to protect the city from the Martin v. Boise Federal Court decision. A ruling that makes actions like the closing of the camp without real alternatives a likely violation of the law.

A two-year campaign by the Freedom Sleepers inspired a challenge to the city law against sleeping outside or in a vehicle. The council voted to continue the cruel and now illegal ordinance but did agree to the formation of a Homelessness Coordinating Committee which issued its recommendations at the May 9, 2017 city council meeting. The city has yet to implement the plan.

The community is still waiting for the emergency recommendations of the April 11,2000 Homeless Issues Task Force to be initiated. These recommendations celebrate a potential collaboration between the city and the county, a collaboration with little or no results other than citations and jail for those who cannot afford housing.

This is a homeless emergency. We cannot wait for city officials to take action. How can we let our neighbors who live outside suffer another cold sleepless night hiding from danger? We plan to form a survival camp in a parking structure. We are raising money to pay for the bail and fines of anyone charged for participating in the formation of a safe camping area in or near downtown Santa Cruz.

Donations will encourage participation in this nonviolent direct action campaign to form stable living conditions for people who cannot afford housing in Santa Cruz. We need to apply enough pressure for the city to end its years of delay in providing shelter and safe RV parking for those who have lost their housing.

We will not let the city and county squander another $10 million grant to help the homeless without implementing safe camping and vehicle areas, providing showers, toilets, phone and computer charging sites and storage.

Call 1-800-884-1136 to join the emergency survival camp
https://www.facebook.com/groups/SantaCruzF...
Add Your Comments
Support Independent Media
We are 100% volunteer and depend on your participation to sustain our efforts!