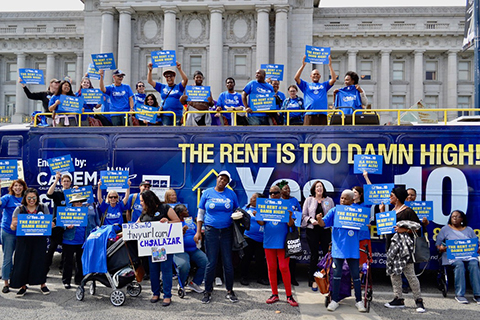 UPDATE 11/8: While millions of ballots remain uncounted in California, it appears Prop 10 was defeated.

Grassroots activists up and down the state have been campaigning hard for the Affordable Housing Act, a ballot initiative to repeal California’s Costa Hawkins state law and return control of rental housing law to local jurisdictions. Several localities have promised to act rapidly should Proposition 10 pass, and housing advocates are ready to push those that haven't. But real estate interests have spent over $70 million to defeat Prop 10, and their massive expenditure appears to be working, with polls showing a majority of California voters opposed to the proposition despite the escalating affordable housing crisis. Should the Affordable Housing Act be defeated on November 6, housing rights activists remain committed to pushing for rent control and other tenant protections locally and statewide in the future. Nationwide, a new movement has been inspired by California's efforts.

“Yes on Prop 10,” San Francisco Board of Supervisors Endorses Proposition 10 |

Proposition 10, the rebellion against greedy landlords, realtors and developers |

Phonebank for Jovanka and Prop 10: The Affordable Housing Act |

Canvass for Yes on Prop 10 & Jovanka Beckles at BART |

Canvass for Yes on Prop 10 & Jovanka Beckles in Berkeley |

Socialist Analysis of 2018 Elections - Can the ‘Blue Wave’ Turn the Reactionary Tide? |

Organizing Meeting for Prop 10 - Affordable Housing for All!