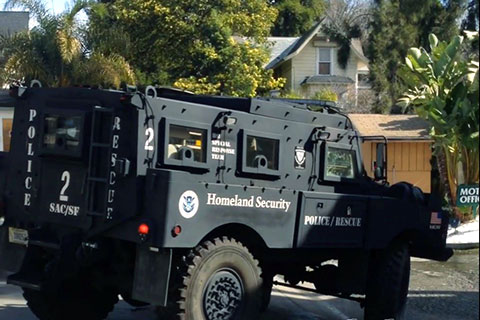 Santa Cruz is a Sanctuary City. Following the DHS/ICE raids in Santa Cruz on February 13, SCPD Chief Kevin Vogel claimed the department cooperated with DHS only because they thought the raids were to target violent gang members, and that DHS lied about their intention to detain non-criminal undocumented individuals. During deliberations to strengthen the status of Santa Cruz as a Sanctuary City at the February 28 Santa Cruz City Council meeting, however, members of the public pressured Vogel to admit that an ICE/DHS agent has not only been working closely with, but even given office space by the Santa Cruz Police Department since 2009, and was involved in the recent raids in some capacity.

Later in the evening, a motion to change the city's Sanctuary City Resolution to upgrade it to an ordinance was passed unanimously by the city council. Activists who have been working to modify the resolution for some time considered the council vote a victory, but had hoped stronger language would be incorporated into the new ordinance.

Santa Cruz Council Watch writes: Let’s be clear, this is a victory and something only possible with massive public support for the move from resolution to ordinance. However, the advocates of Sanctuary wanted stronger language than what was proposed, “the strongest possible” was a phrase we heard a lot in the comments. Between the time that the City Attorney called the ordinance “not particularly strong” and the time of the vote, not much had changed in the language. Notification was added, but notification after ICE activity and “when” practical will likely be next to useless.

There was no language added to end cooperation with DHS/ICE as many speakers demanded. There was no language added to close any loopholes or help mend the broken trust between the community and the police. There was nothing added to stem the influence of this embedded agent. There was nothing the speakers demanded added actually, the only demand met was the change from resolution to ordinance. Speakers did demand full transparency from our police moving forward though, and they were rewarded with the news that since 2009, the agency that Vogel publicly said lied to him, the agency that Vogel called unworthy of SCPD’s trust and cooperation, has an agent with full access to our police, and even an office in their HQ.