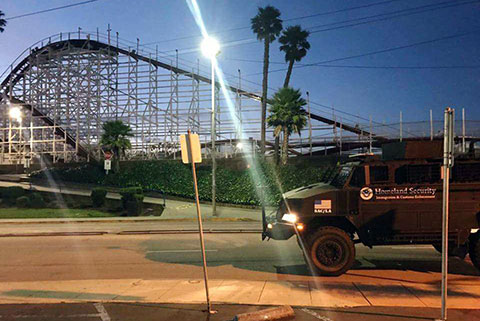 What sounded like a garbage truck at first in the dark hours of the morning turned out to be a nightmare for many families in the Beach Flats, Lower Ocean, and Live Oak neighborhoods of Santa Cruz on Monday morning, February 13. Beach Flats residents report hearing helicopters overhead and flash grenades were cast into several homes while an unidentified voice (no indication of jurisdiction) on a loudspeaker demanded that "[street address] come out with hands on head" blared. This caused confusion because [street address] is the address to the entire apartments complex.

Several streets were blocked off by armored vehicles, including SCPD’s BEARCAT while heavily armed officers in combat gear from the Department of Homeland Security (DHS) aided by Santa Cruz Police Department (SCPD) began banging on multiple doors and pried open an apartment door with a crowbar. Neighbors witnessed a family of three, including an 11 year-old girl, detained in handcuffs for over two hours as DHS tore through the apartment, confiscating phones and demanding identification. All three were released upon providing their IDs, passports, and TPS [Temporary Protected Status] cards. One of the detainees told a neighbor that they were intimidated by officers after telling the officers that the person being sought after did not live at that address. The officers threatened to charge them with accessory.

Just a few miles East, at the same time, families in the Corcoran Apartments near 17th Ave were driven out of their homes with flash bang grenades, and windows were smashed in. A man with a work visa was taken, leaving behind his wife, toddler and an infant. The man was mistakenly arrested for having the same first and last name as the target suspect. After an attempt to charge the man with extortion, he was released after a court hearing on Wednesday morning, along with three others who were also mistakenly arrested.