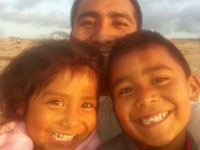 On Oct 21, U.S. Immigration and Customs Enforcement (ICE) raided family homes in Monterey County by pretending to be local police, including wearing jackets that said "POLICE" on them, knocking on people's doors pretending that they just wanted to ask some questions, and then arresting them without any warrants.

Two of the people detained in these raids were Jesus (Chucho) Cirino Jimenez and his good friend Eduardo Cuevas Vasquez in Seaside, CA. ICE is claiming that because Chucho has a previous DUI conviction and Eduardo has two DUIs, they are irredeemable and disposable.

Chucho is a 51-year-old father of 3 U.S citizens and the grandfather of a 3-year-old boy who he helps raise. He has lived in the United States since 1989. Eduardo is a 29-year-old father of two little U.S. citizen children, a 3-year-old girl and 5-year-old boy. The 5-year-old was telling his classmates that a group of men took his daddy away, and Eduardo's wife Mirna had to explain to the teacher what was happening. Eduardo has lived in the U.S. since 2005.