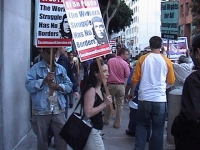 On Wednesday, Oct. 22, Immigration and Customs Enforcement (ICE) and the Department of Homeland Security raided more than a dozen homes in San Francisco, South San Francisco, and Richmond. San Francisco homes targeted in the raid include ten in the Tenderloin, six in Bayview, and one in the Mission district. The attacks were purportedly linked to an investigation of the El Salvadorian MS-13 street gang.

Victims of the attack included a San Francisco family, reportedly all US citizens. The home of Julio Cesar Hernandez was raided around 4:30 am by ICE officials who broke down doors, tossed around the family’s belongings, pointed a pistol at Hernandez, and then handcuffed all the adults in the home. Hernandez’s two children, one 4 years old and the other 7 months old, were traumatized by the ordeal.

On Thursday, Oct. 23, community members gathered in front of the ICE office in San Francisco for an emergency protest against the raids. Dozens of people attended the protest, including independent Congressional candidate Cindy Sheehan and progressive candidate for supervisor Eric Quezada.