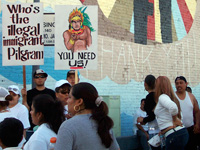 danielsan writes, "Migrawatch heard about it first, sending a message Tuesday night to be on alert. Turns out five people were disappeared by the Feds in Watsonville, plus two in Capitola, fifteen in Seaside, two in Salinas, and another in San Jose. As always, they claim they are selectively targeting dangerous criminals and those who have defied orders to be deported, yet the Santa Cruz Sentinel quotes Lori Haley of ICE, saying "Six of the people arrested had criminal convictions." What about the other nineteen people?

"That proportion isn't the exception, either. In fact it's the rule: so far in 2008, only 300 out of 1,620 human beings arrested are called "criminal aliens" by the Senile. So for every "criminal" that ICE picks up, four more people are the acceptable colateral damage." Read More