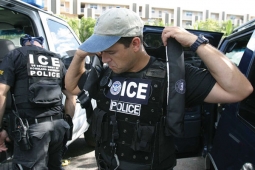 The lessons of the raid scandal are clear. First, the public must always question the Trump administration's "official story," which all too often ultimately relies on scapegoating and misinformation to further an extreme political agenda.

Second, DHS and ICE have surpassed any remaining bounds of decency, undermining community trust in any institution entangled with them. The agencies executing mass deportations and profiling are simply not appropriate partners for any local government in California. For many years, our groups have criticized these agencies' ample record of deceit, secrecy, and abuse. Yet a recent series of profoundly disturbing events - from this deception to CBP's interference in a domestic flight - are undeniable proof that these agencies have fallen to a shocking new low.

Finally, we must all question narratives that demonize, criminalize, and scapegoat vulnerable communities. The fact that a person who happens to be an immigrant has a record, even a "serious" one, does not mean that person ceases to be a human being. In the nation that incarcerates more people than any other on earth through a justice system wrought with racial and class disparities, we must seek to uphold, not trample, our common humanity. We must seek solutions that advance our values of rehabilitation and transformation.

For all of the reasons above, our leaders must pass the CA Values Act, SB 54, by Senate President Pro Tem Kevin de León. To ensure that no local or state resources will fuel mass deportations is a starting point, not an end point, to address the vast civil liberties crisis DHS is prepared to unleash.

ACLU of Northern California
https://www.aclunc.org/
Add Your Comments
Support Independent Media
We are 100% volunteer and depend on your participation to sustain our efforts!