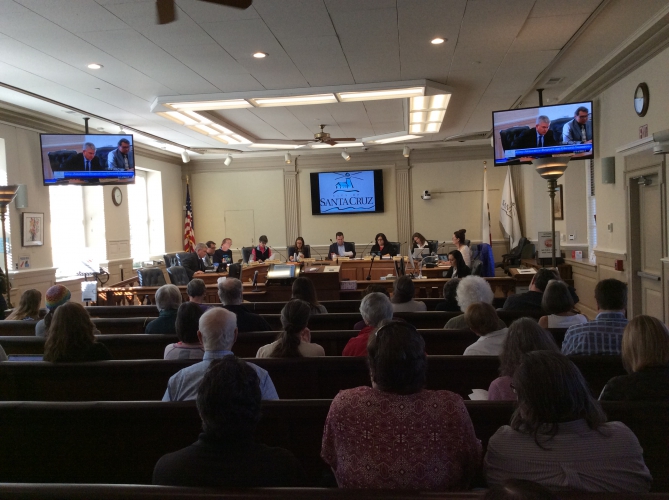 original image (2592x1936)
Much talk and political energy is being generated around the need to pass a strong Resolution establishing in clear and resonant terms that Santa Cruz is a Sanctuary City and commits itself to providing protections for our immigrant and/or undocumented residents. But as a practical matter, a resolution does little more than express the community sense that it wants to protect its underserved and at risk communities. Such a resolution, however, strong and well-intended, cannot and will not offer real protection to the immigrant community nor will it substantially effect or strengthen law enforcement policies and procedures already in place. And although great work is being done to support and protect our immigrant communities in the face of the racist and xenophobic policies being pushed forward by the Trump Administration, these communities need and deserve more than just the gesture of support a resolution from the City Council or Board of Supervisors would offer. It is not that resolutions are weak and ineffectual in and of themselves. It's that they lack the reach and power that is at the core of every municipal ordinance. It is the rule of law that we want brought to bear on those who would otherwise violate the rights of immigrants who want only the right to work and live in peace and freedom.

In my opinion, the energy being expended and commitment be pledged would be more effective in support of a municipal or county wide ordinance providing real, substantive protections. And the most important and effective aspect of an ordinance is that it can include within its provisions penalties for violation of those provisions which could create a real and punitive bulwark against the kind of threats and coercion that all those of compassion and good will abhor.

Our City Council can take official action by two means: resolutions and ordinances. Both of these play important roles in their own respective ways, and they share certain similarities. But there are distinctions between the two, and it is good to know the differences. The distinction between an ordinance and a resolution is in subject matter, not terminology. An ordinance cannot be changed into a resolution merely by calling it a resolution, nor may the requirements for enacting an ordinance be by-passed by simply passing a resolution. A resolution generally states a position or policy of a city. An ordinance is more formal and authoritative than a resolution. An ordinance is a local law that usually regulates persons or property and customarily relates to a matter of a general and permanent nature. However, an ordinance is void if it conflicts with the U.S. Constitution, the California Constitution, or a federal or state law. Also, even though an ordinance might be valid at the time it was passed, if a law subsequently enacted by the state legislature conflicts with the ordinance, the ordinance is void. In this regard, it would be well to be mindful of 8 USC 1373 which limits the reach of the kind of ordinance we would be seeking. It provides:

"Notwithstanding any other provision of Federal, State, or local law, a Federal, State, or local government entity or official may not prohibit, or in any way restrict, any government entity or official from sending to, or receiving from, the Immigration and Naturalization Service information regarding the citizenship or immigration status, lawful or unlawful, of any individual."

With that statutory limitation in mind, it remains possible and within our political will to craft a strong municipal ordinance which protects our immigrant and undocumented community; a municipal law that is both appropriate and necessary under present circumstance.

That having been said, we must continue doing whatever we can to protect the communities within our community, both individually and collectively. We always hope for the best from our public officials and law enforcement agencies and a strong municipal ordinance with the force of law could offer real protection to our immigrant and undocumented residents. Together we must step up in this time of crisis.