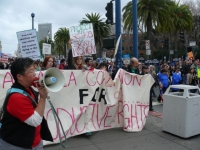 On January 24th, the "March For Life" took place in San Francisco. Tens of thousands of religious and social conservatives converged on San Francisco for an anti-abortion, anti-gay march down Embarcadero. Several hundred counter-protesters showed up to denounce the right-wing agenda of the marchers. The Bay Area Coalition for Reproduction Rights (BACORR) called on human rights supporters to protest this so-called “Walk for Life." Some theorize that the counter-protest was probably smaller than in previous years because some pro-choice groups and local corporate newspapers had encouraged people to ignore the march.

As part of this year's protest, BACORR called attention to the ICE raids against immigrant communities. BACORR spokesperson Anita O’Shea writes “The ‘Walk for Life’ is part of a multi-pronged rightwing movement that includes bigots in suits as well as armed, vigilante Minutemen, clinic bombers, and gay bashers…..We must stop the blame game against women, immigrants and queers before the ultra-right gains momentum.”

In recent years the Catholic Church has helped push through two discriminatory acts, the “Conscience Rule” and Proposition 8. The "Conscience Rule" allows health care providers to refuse to fill a birth control prescription for "moral" reasons. BACORR co-chair Gemma Mirkinson responded to the institution of the Conscience Rule asking, “What’s next: refusing service to people with AIDS, or immigrants or transgender folks? This is nothing but bigotry sanctioned by the highest office of the land and applauded by the people who will trek through our city January 24.”