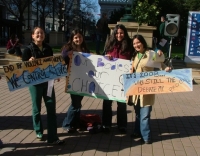 On Friday January 18th, anti-choicers gathered for the first-ever "Standing Up For Life" conference/march in Oakland. This march placed its influence on the African American community of the East Bay. Dr. Alveda C. King and Dr. Clenard Childress, founder of Blackgenocide.org, an anti-choice website comparing abortion to the next holocaust, were the event's scheduled headliners. Comparisons with genocide are being used with misleading statistics to accuse abortion providers of racist practices.

Standing Up for Life had planned to march past the Women's Choice Clinic, which is an avid supporter of all people of color, religions, genders, sizes and abilities. WCC focuses on community health empowerment, and it plans fight these accusations and stand up "against the patriarchal, RACIST, police state that 'would rather see us die than live healthy, free lives.'"