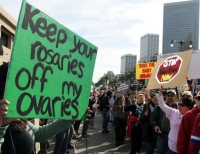 Pro-Reproductive Rights Actions to Oppose “Walk for Life” on January 20th
“Forward, Not Back—Reproductive Justice for All!” in San Francisco

On Saturday, January 20th 2007, National and local feminist and community activists convened a broad-based, peaceable counter-protest in response to the third annual “Walk for Life—West Coast” march in San Francisco. The kick-off rally began at 10:30 a.m. at Pier 5 (on Embarcadero near Market Street); this was followed at 11:30 a.m. by a multi-issue counter-demonstration to the “Walk for Life” route along the Embarcadero waterfront; and ended with a community rally at Aquatic Park with more speakers, music and art. BACORR also hosted a post-rally gathering at New Valencia Hall at 1908 Mission St in San Francisco at 4:00 p.m.

Indybay's Past Coverage of Protests Against the "Walk for Life" | SFBG Op-Ed: "Why We Show Up: The Value of Visibility | BACORR