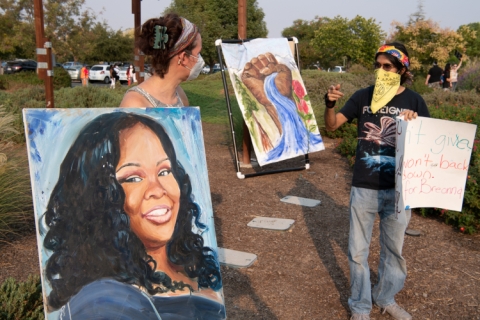 Anti Police-Terror Project writes: Breonna Taylor was murdered and yet her neighbor’s walls got more justice than Breonna Taylor herself. [On September 23], The Grand Jury returned with an indictment of one single officer with three counts of wanton endangerment for shooting into neighboring apartments — and no charges for the murder of Breonna Taylor. Apparently being Black, educated, employed and asleep in your own home is justified causation for being shot to death by law enforcement. Breonna Taylor’s story is not unique in America. Since 2015, Black women, who are 13 percent of the female population, account for 20 percent of the women shot and killed by police and 28 percent of the unarmed deaths.

Announcement of the grand jury's decision led to national outrage and multiple protests in the San Francisco Bay Area's larger cities of Oakland and San Francisco, but also in smaller cities including Menlo Park on the Peninsula. In the Central Valley city of Fresno, protesters gathered in front of the Unitarian Universalist Church, a frequent venue for protests, for a vigil in Breonna Taylor's honor.

Vigil for Breonna Taylor in Fresno |

Why Did Protesters Shut Down Intersection in Menlo Park?