Add an Event
Newswire
Calendar
Features
Home
Donate
From the Open-Publishing Calendar
From the Open-Publishing Newswire
Indybay Feature
Related Categories: East Bay | U.S. | Police State & Prisons | Racial Justice
Statement on Breonna Taylor
by APTP
Thursday Sep 24th, 2020 3:45 PM
We send our deepest condolences to the family of Breonna Taylor. And we send our love and hearts to the millions of Black people who were once again told today that their lives do not matter. 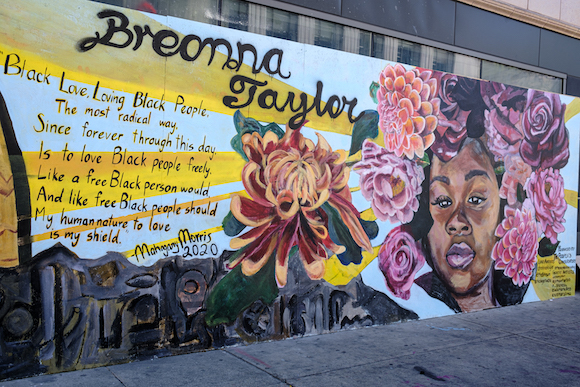 Breonna Taylor was murdered and yet her neighbor’s walls got more justice than Breonna Taylor herself. The Grand Jury returned with an indictment of one single officer with three counts of wanton endangerment for shooting into neighboring apartments — and no charges for the murder of Breonna Taylor.

Apparently being Black, educated, employed and asleep in your own home is justified causation for being shot to death by law enforcement. Breonna Taylor’s story is not unique in America. Since 2015, Black women, who are 13 percent of the female population, account for 20 percent of the women shot and killed by police and 28 percent of the unarmed deaths.

We expect swift and broad reactions from the people in Oakland and Sacramento, as well as across the state and the nation.

After decades of unanswered-for state violence, the masses have stopped asking, and are demanding, justice for our fallen loved ones. Yet, despite the mobilization of millions across the country, those demands have gone ignored and unaddressed. Instead, the same systems that police, incarcerate and kill us have instituted curfews and called in military forces to be used against its own people, showing us that our country values control of the population over equity and justice.

To be clear, we will not stand idly by while our people are murdered, incarcerated, criminalized, harassed, harmed, deported and treated as less than human. We will continue to be in the streets, which belong to us, protest, organize, resist and build. Nor will we allow state agencies to create division amongst organizations or demonize Black protestors or our allies. We know who the enemy is and it is not each other. As Dr. King stated so eloquently, “Riots are the language of the unheard”... America: Black people are tired of screaming into the wind.

Watch the press conference we held earlier today with CURYJ, CRC, CA Families United 4 Justice, Voices of Strength, FAM, and the Erik Salgado family.
http://www.antipoliceterrorproject.org
Add Your Comments
Support Independent Media
We are 100% volunteer and depend on your participation to sustain our efforts!