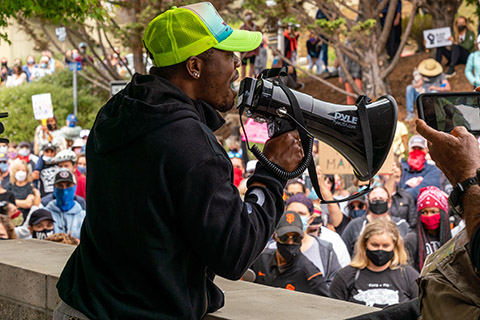 On August 21, police officers in the town of Tiburon in Marin County questioned the owners of Yema, a store on Main Street. The officers insisted the merchant, who is Black, show proof that he really did belong inside the store he owns. One week later, 500 protesters marched to the police station in solidarity with the store owner and called for an end to racial profiling.

Yema Khalif said he was working late on that Friday night when officers came to the door of his athletic wear store and assumed he, his co-owner, and a friend who are also Black, did not belong in the store. A police sergeant soon joined two other officers and repeatedly questioned Khalif. The confrontation only ended when a neighbor down the street shouted at police, explaining that Khalif had every right to be there.

Community outcry resulted in the town announcing on September 1 that Sergeant Michael Blasi, who was recorded in the interaction, will step down from his post. The Chief Police resigned on September 13, although he denied it had anything to do with the incident.