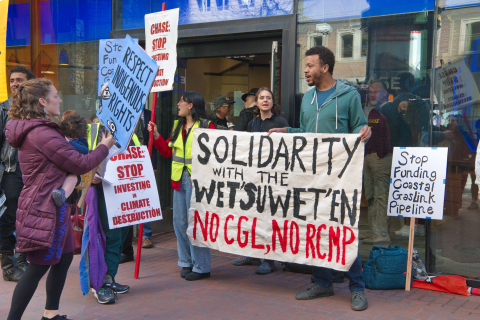 Assembling at Market and Montgomery street, over 150 demonstrators marched to the Market Street JP Morgan Chase branch to demand that the Bank stop the worst of all pipelines, the money pipeline from the Bank to the fossil fuel industry. Between 2016 and 2018 JP Morgan Chase was the biggest fossil fuel industry funder at almost $196 billion. Wells Fargo was second at over $151 billion.

Chase is the largest financier in the areas of Arctic oil and gas, ultra deep water drilling, tar sands oil, and coal mining. Chase is also the top financier for actually expanding fossil fuel production. Coal, a dying industry, is highly dependent on bank financing for survival while the oil industry is losing its appeal to investors on many fronts.

The Saudis are diversifying their massive wealth away from oil. Stock prices in the industry are down as the financial press becomes ever less enthusiastic about the fossil fuel industry. For example, Zacks, a leading Investment research company, has as its lead article on August 19, 2019, “Oil & Gas US Integrated Industry Outlook: Prospects Gloomy.”