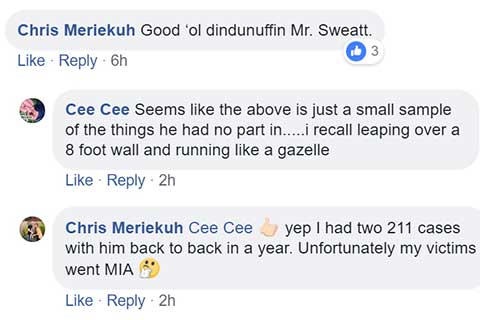 The Santa Cruz Police Department has opened an internal affairs investigation into the conduct of Officer Chris Galli, who in January referred to a man who he had previously arrested as a "dindunuffin" on social media. Galli, posting as "Chris Meriekuh", made the comment about the individual, who is African American and homeless, on Joe Netro's Santa Cruz, CA: Keepin' It Real hate blog. A screen capture of the comment was posted in an Indybay article, helping to raise awareness concerning the racist nature of the term, which originated among law enforcement officers to mock activists participating in the Black Lives Matter Movement during its initial rise in 2014 and 2015. Today the term is used more generally by police as a pejorative to describe black arrestees who deny committing a crime.

In a Good Times Santa Cruz article by Lauren Hepler, Santa Cruz Chief of Police Andrew Mills confirmed that the department had initiated the investigation. "Yes, It has been brought to my attention," Mills told Good Times, "and we have initiated an Internal Affairs investigation into the matter." Netro, who posts on Santa Cruz, CA: Keepin it Real anonymously as "Big Joe 77", allows an environment of hate to flourish in the comments section of his blog. He has responded negatively to the Good Times article, which served either intentionally or unintentionally as a condemnation of his work. The article was also condemned by a chief collaborator of Netro's: Steve Schlicht of Take Back Santa Cruz and the Santa Mierda hate blog. Schlicht called it, "fake news" and accused the Good Times of having a, "we hate cops bias".

Galli's racist comment was made three days after the Santa Cruz Police Department co-sponsored the "March for the Dream", which was held downtown to honor the work of Martin Luther King Jr. The march has been widely attended by community members for the two years it has been co-sponsored by the SCPD and the Santa Cruz Branch of the NAACP.