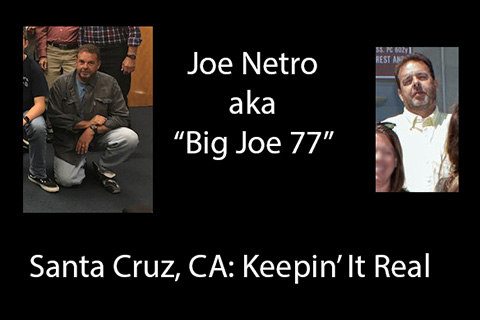 The new hate blog "Santa Cruz, CA: Keepin' It Real" has gradually been gaining followers since its founding in 2017. It is written under the pen name "Big Joe 77" by Joe Netro, a self-described "cop" who is retired from working 26 years as a correctional officer at Soledad state prison. He also volunteers with the Santa Cruz Police Department, and he served as a member of the 2016-17 Santa Cruz County Grand Jury which issued a controversial, and some say biased, report critical of the county's Syringe Services Program. Recently, Netro has joined Take Back Santa Cruz member Steve Schlicht's "Santa Mierda Podcast Network," appearing on multiple podcasts.

Peter Green writes: Netro has been accused of inaccurate reporting and outright defamation multiple times by readers of his blog. Netro's court "reporting" is one-sided and extremely biased. He rarely (or never) reports on the legal arguments put forward by defendants and/or their attorneys. Netro's blog is also a place were hate is fomented; Netro routinely creates bigoted posts that are overtly anti-homeless. He has created a number of racist posts, and the vigilante and/or violent comments made by his readers are left to remain on his sites. Netro openly refuses to remove hate comments.

Related Features: Mayor's Public Safety Task Force Member Is "Fine with Junkies Dying" | Who Runs Take Back Santa Cruz and What Are They Up To?