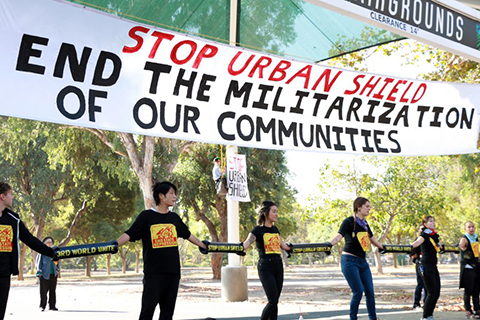 On January 14, following years of problems with racial profiling, right wing vigilantes, and environmental abuse, the Alameda County Urban Shield Task Force, created by the Alameda County Board of Supervisors to "end Urban Shield as it is currently constituted," issued recommendations to transform Urban Shield from a highly militarized SWAT competition and weapons expo into a community-focused safety and resilience exercise.

The recommendations include eliminating military-type SWAT teams and competition from the exercises; eliminating the weapons expo/vendor show component; ensuring that the majority of people implementing exercises are Fire and Emergency Managers and community organizations rather than law enforcement; getting rid of the notorious “Urban Shield” label; evaluating law enforcement participants' compliance with their department's use-of-force policies; and dedicating $5 million of funding for the Health Care Services Agency and Social Services Agency to carry out emergency preparedness training and exercises.

Years of protest, public comment, and politicking have finally created a light at the end of the "Stop Urban Shield" tunnel. Alameda County Sheriff Greg Ahern and other law enforcement agencies have been lobbying county supervisors and are expected to push back hard when the recommendations come to a vote on Tuesday, February 26. Urban Shield opponents say that a large physical "Stop Urban Shield" presence at the meeting on the 26th is important, but that you can also reach out to Supervisors ahead of time and tell them not to buckle to the pressure.

Urban Shield Fate to be Decided at Alameda County Board of Sups | Urban Shield may end on February 26 .... with your help! |