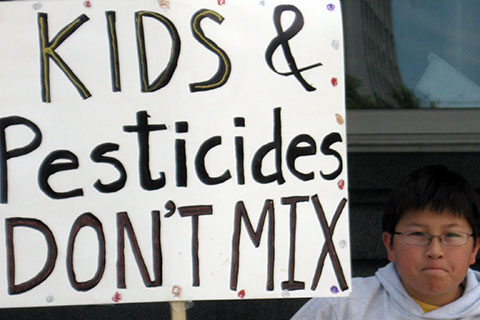 The state agency charged with regulating California’s pesticide industry allows manufacturers to make up their own usage rules, continues to allow a brain-damaging chemical to be used on food crops, is slow to hold applicators accountable when workers are poisoned, and routinely ignores community input in its rulemaking process. That’s according to California Environmental Justice Alliance’s (CEJA’s) 2017 Environmental Justice Agency Assessment.

The assessment specifically cited the California Department of Pesticide Regulation (DPR) for its cozy dealings with DowDuPont over the carcinogenic pesticide Telone, one of the most heavily used in California. Under pressure from DowDuPont, DPR in 1995 reversed a five-year old ban of Telone, and allowed the manufacturer to make up its own rules for its reintroduction and to be a key enforcer of those rules. Last year, despite public pressure to increase restrictions on Telone, DPR relaxed its cancer risk level in a way that allowed usage to increase by 50%.

The Department also drew heat for its failure to take meaningful action on DowDuPont’s neurotoxic organophosphate pesticide chlorpyrifos. The assessment also called out DPR for its slow response to a series of drift incidents in 2017 that sickened dozens of farmworkers. Only two of the five incidents have been investigated to date.

“This assessment should serve as a badly-needed wake-up call to DPR to remember who they serve,” said Lucia Calderon, organizer of the Salinas-based Safe Ag Safe Schools coalition. “This only strengthens the argument that the department prioritizes the pesticide industry over the health and well-being of some of California’s most impacted communities. The Central Coast’s strawberry industry continues to depend on vast inputs of carcinogenic chemicals and DPR is simply unable or unwilling to do anything about it.”

Related Feature: Pesticide Use Near Record High in California