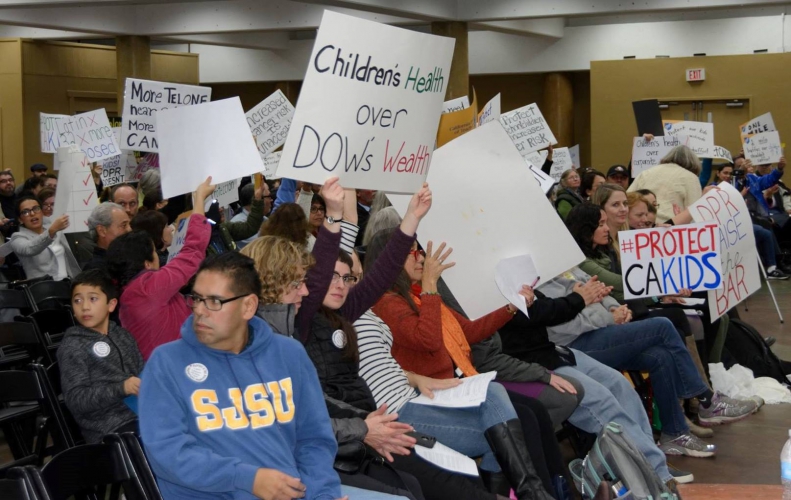 Oakland, California – Attorneys representing a Ventura County farmworker and environmental justice groups filed suit in the Superior Court of California, County of Alameda this morning against the California Department of Pesticide Regulation (DPR) for its failure to follow the recommendations of scientists and provide public review for the regulation of the Prop 65-listed carcinogenic pesticide 1,3-dichlorpropene (brand name: Telone). The chemical has a long history shrouded in secrecy, including reintroduction to the market after being banned more than 25 years ago.

“State officials ignored science and shirked public oversight as they ensured the continued and potentially expanded use of this cancer-causing pesticide,” said Natalia Ospina, an Oxnard-based attorney with California Rural Legal Assistance representing the farmworker plaintiff. “This blatant regulatory failure continues to put rural and farmworker communities in harm’s way.”

Specifically, the lawsuit first charges that DPR did not follow normal public procedures in developing new rules for Telone, “including public notice, an opportunity for public comment, [and] a response in writing to comments.”

Second, the suit charges that DPR’s underground regulation is not based upon the recommendation of state scientists at the Office of Environmental Health Hazard Assessment (OEHHA), and is in violation of a state law that requires DPR to work with OEHHA to develop health-protective regulations. Instead, DPR chose to ignore OEHHA’s concerns regarding the adequacy of the new permit conditions, or rules for regulating pesticides, “including revised application limits and air concentration standards to protect nearby residents and workers from cancer risks.”

DPR rejected the evidence put forth by state scientists about multiple ways in which Telone gets into bodies at harmful levels; it also overlooked science indicating that children are more vulnerable to its health hazards, and that Telone, in combination with chloropicrin use, is more damaging to health. OEHHA recommended a “target concentration for mitigation” for Telone of 0.10 parts per billion as opposed to DPR’s new relaxed 0.56 parts per billion standard. DPR’s new standard was the basis for the contested January 1, 2017 permit conditions loosening the annual “safety cap” amounts of Telone per 6 x 6 mile township from 90,250 pounds to 136,000 pounds.

The plaintiffs call for revised regulations and for a new process complying with Government and Food & Agricultural Code, including “regulations that relate to the health effects from 1,3-D [Telone] based upon the recommendations of OEHHA and in concert with OEHHA so as to satisfy their joint and mutual responsibility.”

Plaintiff Juana Vasquez, a farmworker in Ventura County, is concerned for other farmworkers and for her children who attend schools near fields. “I want the agency to follow the laws and not to overstep so that the community will not get sick. There are many people who work in the fields that are at risk of getting sick because of pesticides. I am also worried that my children … are more vulnerable because they are underage and … pesticides could hurt their health.”

The other plaintiffs are Californians for Pesticide Reform and the Pesticide Action Network.

Banned for agricultural use in the European Union since 2011, as well as in California between 1990 and 1995, Telone is the third most used pesticide in California by pounds and the second most used “pesticide of public health concern” near public schools. Telone is a pre-plant fumigant, injected into the soil at high volumes, that is prone to drift for days after and miles away from its application. At the three pesticide air-monitoring school sites (Rio Mesa High in Oxnard, Shafter High in Kern County, and Ohlone Elementary School in North Monterey County), DPR found concentrations of Telone far above the health protective lifetime cancer risk level recently recommended by OEHHA.

Ohlone Elementary teacher Melissa Dennis said: “DPR came last October to tell us the ‘good news’ that they measured cancer-causing Telone at .12 parts per billion in the air our schoolchildren breathe. How is that ‘good’? OEHHA scientists say we should be concerned at .1 parts per billion. As teachers and parents, we’re worried and angry!”

Ms. Vasquez added: “Mothers like me want to live to see our children grow up. If we get cancer, our children will be left without mothers, without fathers.”

Californians for Pesticide Reform (CPR) is a statewide coalition of more than 190 organizations, founded in 1996 to fundamentally shift the way pesticides are used in California. CPR's mission is to protect public health, improve environmental quality and expand a sustainable and just agriculture system by building a diverse movement across California to change statewide and local pesticide policies and practices.

Headquartered in California, Pesticide Action Network (PAN) North America is one of five regional centers worldwide that represents a coalition of 600 public interest organizations in more than 90 countries. PAN challenges the global proliferation of pesticides, defends basic rights to health and environmental quality, and works to ensure the transition to a just and viable food system.

Founded in 1966, CRLA’s mission is to fight for justice and individual rights alongside the most exploited communities of our society. Through a network of regional offices and cross-cutting programs, CRLA provides legal services to over 43,723 low-income people annually. Our work impacts farmworkers, individuals with disabilities, immigrant populations, LGBT communities, women, children and families in rural areas.

http://www.panna.org/press-release/departm...
Add Your Comments
Support Independent Media
We are 100% volunteer and depend on your participation to sustain our efforts!