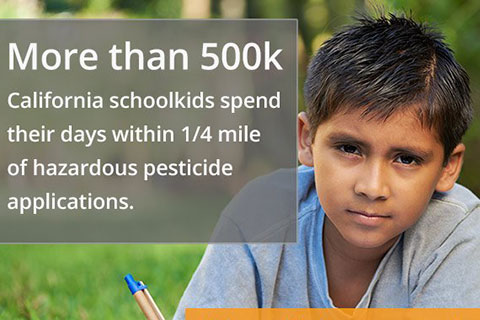 Agricultural pesticide use in California remains at a near-record high, according to data released by the California Department of Pesticide Regulation. DPR's latest numbers paint a grim picture of the state’s continued reliance on vast quantities of agricultural pesticides - 209 million pounds in 2016. That’s the third highest since reporting began in 1990. The greatest burden continues to be borne by the San Joaquin Valley and Central Coast. In Monterey County, use of the drift-prone carcinogenic fumigant chloropicrin – the vast majority used on strawberries - rose above two million pounds, a 14% increase over the prior year.

The increase in use of chloropicrin, a Word War I-era poison gas and carcinogen that causes severe lung damage, is especially troubling to public health advocates in the Monterey Bay. “It’s disheartening that Central Coast strawberries and the workers that grow them continue to be exposed to ever greater quantities of cancer-causing chemicals,” said Lucia Calderon, organizer with the Monterey Bay area-based coalition Safe Ag Safe Schools.