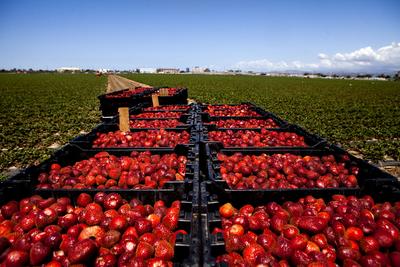 Rather than further restrict the chemical, which is marketed by Dow Chemical under the brand name Telone, officials paved the way for even greater use by adopting a concerning change in the method of calculating cancer risk - over the objections of scientists in the Office of Environmental Health Hazard Assessment (OEHHA), the California Environmental Protection Agency’s main risk assessment office.

Under the new rules, growers will be permitted to use 136,000 lbs of Telone per area, a 50% increase over the prior maximum, which will lead to an even greater risk of cancer.

“Once again, DPR has chosen to listen to Dow Chemical instead of agency scientists,” said Mark Weller, co-director of Californians for Pesticide Reform. “It’s beyond me how DPR can spin this as an improvement. And it’s simply egregious that DPR has again ignored the voices of the frontline communities most at risk, who have repeatedly demanded better protections from this cancer-causing chemical.”

In making the announcement, DPR touted its decision to end the unscientific practice of “banking,” whereby growers were permitted to exceed the allowances of the pesticide for a given area by rolling over unused allotments from prior years. And growers won’t be able to use any Telone at all in the month of December, one of the highest use months in the Central Valley, when typical weather patterns cause the pesticide to linger in the air.

Farmworker and health advocates point out that the allowance has become considerably larger now that DPR has elected to calculate cancer risk in a manner OEHHA concluded is not health protective, and has continued to allow ten times more cancer risk than the one-in-a-million risk level recommended by OEHHA and the Department’s own scientists. A one-in-a-million risk level is already used for most toxic chemicals.

“DPR is not fooling anyone with this plan,” said Caroline Cox, Research Director at the Center for Environmental Health. “There’s no virtue in banning banking if you simply increase the amount that can be used in the first place.”

And Monterey-area advocates point out that the ban on Telone use in December won’t do much for residents living near the Central Coast strawberry fields where some of the heaviest Telone use occurs earlier in the fall. “We need better protections from Telone at our schools and in our communities, but DPR has given us less. The new regulation allows for more Telone use in every township in Monterey and Santa Cruz counties. It’s outrageous.” said Francisco Rodriguez, president of the Pajaro Valley Federation of Teachers.

The fumigant pesticide Telone is used in vast quantities in California – more than 13 million pounds in 2014 - and in strawberry fields more than any other crop. That amount has risen steadily over the last few years as it increasingly replaces the ozone-depleting methyl bromide, which is being phased out under an international treaty. Fumigant pesticides raise special concern because of their tendency to drift away from the fields where they are applied and onto the homes and schools of farmworker communities, and to persist in the air for long periods of time. Moreover, a 2014 report by the California Department of Public Health revealed that Telone is the second most heavily-used pesticide near public schools in California.

A pesticide air monitor operated by DPR at Shafter High School in Kern County recorded Telone in the air in 2013 at four times DPR’s previous level of concern for cancer risk, even though Telone use in the fields around the school was relatively light, roughly 2/3 the maximum annual allotment. Californians for Pesticide Reform member organization Center for Environmental Health recently sued Dow Chemical about this exposure. And exposures at Shafter High School are likely less than elsewhere in the state. California has only six pesticide air monitors and none of them are located in the 20 towns with the highest Telone use.

The findings of DPR’s own monitoring data have some Shafter parents upset. “There has to be a better way to grow food that doesn’t increase kids’ cancer risk,” said Gary Rodriguez, a 4th grade teacher in Shafter. “We know that Telone is present in Shafter air at dangerous levels, even though it’s not used heavily nearby. This is one pesticide that needs to be phased out immediately. It’s hard to understand why DPR doesn’t do more.”

DPR’s notorious track record when it comes to Dow’s Telone has been widely denounced. Banned in 1990, the pesticide was brought back under heavy pressure from the manufacturer in 1995, with special limits imposed on its use. Soon, however, with demand for the pesticide increasing as an alternative to methyl bromide, DPR invited Dow to write its own rules. The result was Telone “banking” to allow growers to exceed the cap, as well as waivers of the cap when growers wanted to use even more. In the past few months, over 3,600 Californians have sent messages to officials calling for an end to “banking” and the phase out of fumigants.

“DPR’s risk management plan for Telone offered the agency a chance to redeem itself after a series of poor decisions over many years that put the health of farmworker communities at risk,” said Anne Katten, Pesticide and Work Safety Project Director with the California Rural Legal Assistance Foundation. “It’s very disappointing that the agency has again failed to adopt a health protective policy, or to make meaningful progress to phase out the use of this volatile and hazardous pesticide.”

DPR facilitated and released a non-fumigant “Action Plan” in 2013, but has failed to advance meaningful progress towards phasing out fumigants, including Telone, by 2020.


Californians for Pesticide Reform
http://www.pesticidereform.org/
Add Your Comments
Support Independent Media
We are 100% volunteer and depend on your participation to sustain our efforts!