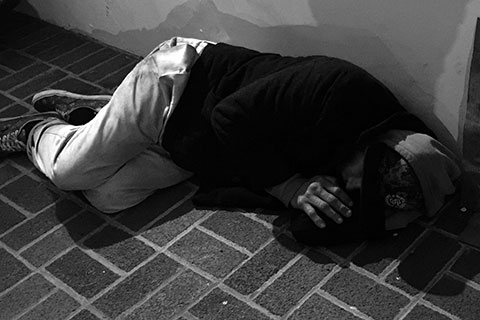 Cops Boot Santa Cruz Homeless Folks to the Curb
Campaign Against Those Without Homes in Santa Cruz Grows More Repressive, Even in the Rain

Keith McHenry reports: Abbi Samuels was arrested on the night of April 7 while filming the police drive those seeking shelter under the Santa Cruz City Hall awning out into the rain. She spent 18 and a half hours in jail before being freed without charges.

On April 17, the police came and kicked people out from under the City Hall awning into the pouring rain during a very severe storm.   Police and park rangers are confiscating survival blankets and sleeping bags, even when spoken for or being watched by friends. On April 18, following a community meeting at the public library on solutions to homelessness, library staff shared that city manager Martin Bernal was making several changes, including the removal of the benches outside the library and the stationing of two police officers.

After the meeting, members of the Freedom Sleepers gathered at City Hall to plan a march on Tuesday, May 9 with the message “Housing For All — No Penalty For Poverty.” SCPD officers arrived around 2:00 am and issued numerous tickets and stay away orders. Two Rangers arrived soon after breakfast was served at about 7:30 am. All was peaceful until a city employee arrived with a leaf blower. She walked up to a person sleeping and blew a burst of dirt into his face. Then the employee blasted dirt and a bowl of food into the face of a man sitting on the stone wall.