Add an Event
Newswire
Calendar
Features
Home
Donate
From the Open-Publishing Calendar
From the Open-Publishing Newswire
Indybay Feature
Publish to Newswire
Add an Event
Related Categories: Santa Cruz Indymedia | Health, Housing & Public Services | Police State & Prisons
Struggle Against Sleeping Ban Becomes a Matter of Survival at City Hall
by Robert Norse
Monday Apr 17th, 2017 11:38 PM
For the last 10 nights since the Winter Shelter program ended (a month earlier than Berkeley's or Salinas's), some of its refugees have been camped at City Hall, spending their nights and some of their days there as well. Some are arrayed just outside the offices of Mayor Cynthia Chase and the same Council majority that kept sleeping a crime in a Council vote last spring. I've written a flyer or two about the issue & distributed it at "liberal" activist gatherings like the Indivisible rally Saturday. So far no Indivisible groups have expressed interest in the 1000-2000 unsheltered. 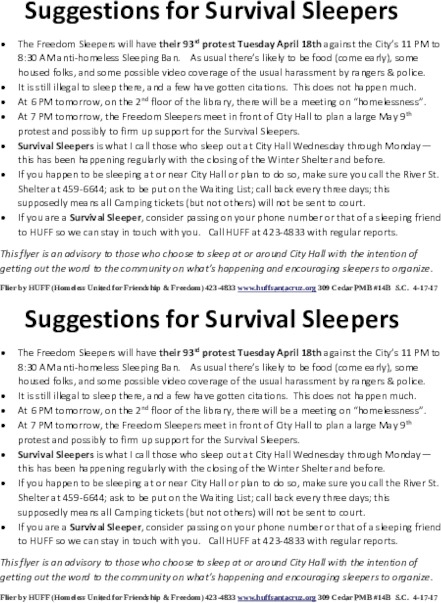 Download PDF (492.0KB)
Survival sleeper Lawrence MacGregor reports police and security thugs driving disabled and elderly sleepers out from under the eaves of City Hall into the rain over the weekend. Another sleeper reported police and rangers following the sleepers across the street to the Civic Auditorium overhang where they then sought shelter--and driven from there. Both structures are vacant at night.

All bathrooms remained closed late at night; the City Hall bathrooms (apparently on the order of City Manager Martin Bernal) during the day as well "for vandalism" (though they seemed to work well enough when "respectable" groups were meeting in City Council chambers.

Video of the April 6th police expulsion raids is at https://youtu.be/BVvpZ5RE9FI .

Freedom Sleepers will be meeting Tuesday night in front of City Hall at 7 PM to discuss preparations to support a May 9th mega-demo against the Sleeping Ban as well as support for the nightly Survival Sleepers. The meeting will follow a 6 PM meeting on the 2nd floor of the Main Public Library around the Homeless Crisis.

There will also be a free showing Wednesday April 19th up at UCSC at the Kresge Seminar Room #159. Featured will be Brent Adams' "Out of Sight, Out of Mind", Israel Dawson's "Freedom Sleepers", and Rebecca Gourevitch's "Holding Out".

Freedom SleepOut #93 will go from Tuesday afternoon until Wednesday morning--the public is invited to drop in, stay awhile, bring blankets, sleeping bags, and video devices to film and post what the City is seeking to hide or ignore--the abuse of homeless people at the very seat of government.
http://huffsantacruz.org
§It's Really Two Wars We Must End
by Robert Norse Monday Apr 17th, 2017 11:38 PM 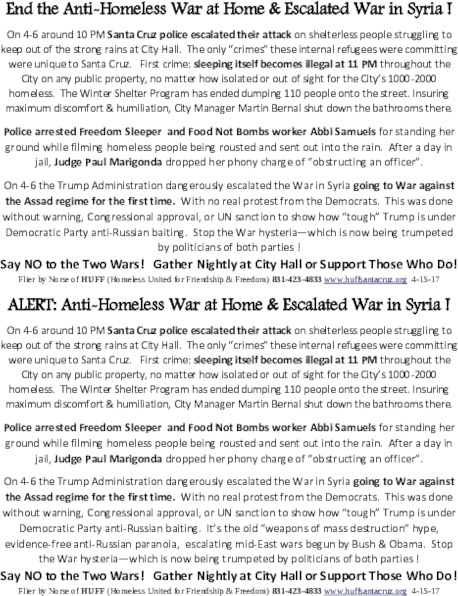 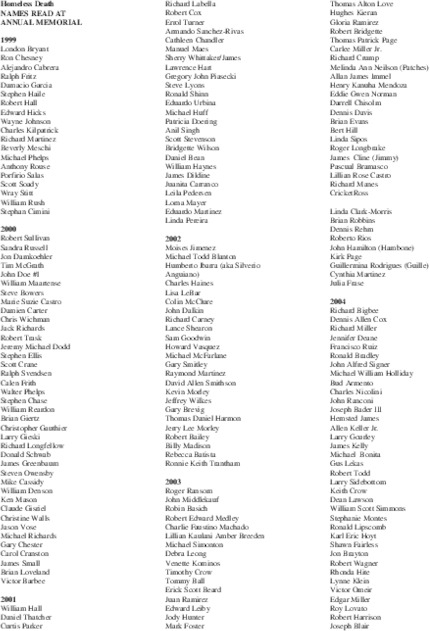 Download PDF (171.0KB)
Thanks to Matt Nathanson of the Homeless Persons Health Project for compiling this information. Ages have been supplied for deaths in the most recent year.
http://huffsantacruz.org
§Police Drive Homeless Out Into the Rain in Santa Cruz
by via annie newman Tuesday Apr 18th, 2017 4:08 PM
Copy the code below to embed this movie into a web page:
Download Video (209.5MB) | Embed Video
Homeless people taking refuge from the rain are driven by the police from the courtyard at Santa Cruz City Hall.
April 7, 2017
Add Your Comments
LATEST COMMENTS ABOUT THIS ARTICLE
Listed below are the latest comments about this post.
These comments are submitted anonymously by website visitors.