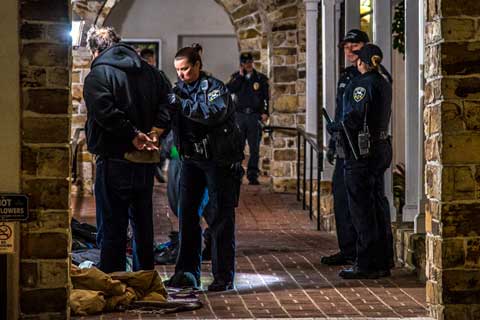 Santa Cruz police initiated a raid at City Hall on November 23 at 3:30 am, shortly after it stopped raining that evening, to clear from the area approximately two dozen individuals who had been sleeping and sheltering themselves from the weather under the eaves of the buildings in the complex. Officers issued citations to individuals, and made one arrest. City Hall property is closed to the public between the hours of 10 pm and 6 am. Many of those sleeping at City Hall were participating in the weekly Freedom Sleepers sleep protest, while others were simply sheltering themselves from the wet weather temporarily with the group.

The evening of November 22-23 marked the 72nd community sleepout organized by the Freedom Sleepers, a coalition of unhoused and housed activists who have been sleeping at Santa Cruz City Hall since July 4, 2015 to protest local laws that criminalize homelessness. Despite intense pressure from the city, police, and park rangers to prevent people from sleeping at City Hall, many of the Freedom Sleepers are receiving feedback from houseless people that the sleepouts are the only place in Santa Cruz where they can get a full night's sleep.

Robert Norse of Homeless United for Friendship and Freedom (HUFF) reported on an incident that occurred on October 14 when police cleared a group of individuals sheltering themselves from rainy weather at the Santa Cruz Civic. Robert Norse writes: Around 11 AM today, activist and car-dweller Jessica Nash reports that two vans of "Park Rangers" from Harvey West followed by 5 cars of SCPD in uniform pulled up on a dozen homeless people. They were sitting on the wall and under sheltering trees from the rain by the side of the sidewalk across from the Civic Auditorium today. The armed officers threatened to seize blankets, bikes, food, and belongings if the homeless didn't move out into the bad weather.

Related Features: Getting a Good Night's Sleep at Santa Cruz City Hall | Going Into Year Two with the Freedom Sleepers