Add an Event
Newswire
Calendar
Features
Home
Donate
From the Open-Publishing Calendar
From the Open-Publishing Newswire
Indybay Feature
Publish to Newswire
Add an Event
Related Categories: Santa Cruz Indymedia | Government & Elections | Health, Housing & Public Services | Police State & Prisons
After Rain, Santa Cruz Police Eject Homeless Individuals Sleeping at City Hall and Make One Arrest
by Alex Darocy (alex [at] alexdarocy.com)
Saturday Nov 26th, 2016 4:26 PM
Santa Cruz police initiated a raid at City Hall on November 23 at 3:30 am, shortly after it stopped raining that evening, to clear from the area approximately two dozen individuals who had been sleeping and sheltering themselves from the weather under the eaves of the buildings in the complex. Officers issued citations to individuals, and made one arrest. City Hall property is closed to the public between the hours of 10 pm and 6 am. Many of those sleeping at City Hall were participating in the weekly Freedom Sleepers sleep protest, while others were simply sheltering themselves from the wet weather temporarily with the group. [Top photo: SCPD officers wake up individuals sleeping at Santa Cruz City Hall to avoid the rain on November 23. Scroll down for more photos.] 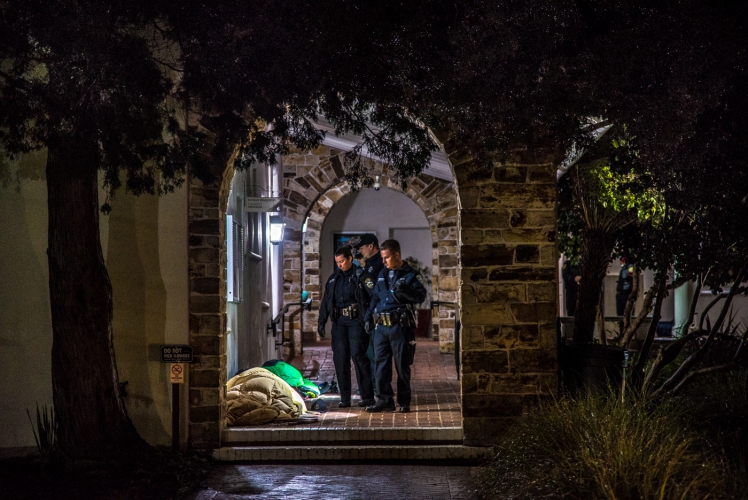 original image (1400x935)
The evening of November 22-23 marked the 72nd community sleepout organized by the Freedom Sleepers, a coalition of unhoused and housed activists who have been sleeping at Santa Cruz City Hall since July 4, 2015 to protest local laws that criminalize homelessness.

The Freedom Sleepers generally sleep on the sidewalk in front of City Hall. By choosing to locate the protest on the sidewalk, the group receives less attention from police, who have raided the sleepouts many times in the past.

Despite intense pressure from the city, police, and park rangers to prevent people from sleeping at City Hall, many of the Freedom Sleepers are receiving feedback from houseless people that the sleepouts are the only place in Santa Cruz where they can get a full night's sleep.

Before the police arrived on November 23, a group of five security guards with First Alarm conducted an initial sweep of City Hall to wake some of the sleepers up.

One person said he wouldn't be able to go back to sleep after being woken up by the security guards.

Later, another person who was issued a citation questioned its validity. As police officers were writing him up, he stated loudly that he would simply be moving across the street to sleep when law enforcement was gone.

After the raid, quite a few people did leave the area. The concrete was damp, and the temperature was dipping into the mid-forties.

The sky had cleared, however, and by 5 am about a dozen individuals had moved to the sidewalk to go back to sleep while it was still dark.

The Freedom Sleepers have said they will continue to sleep every Tuesday night at Santa Cruz City Hall indefinitely.


To read some previous coverage of the Freedom Sleepers, see:


Alex Darocy
http://alexdarocy.blogspot.com/
§At 3 am dozens slept under the eaves of City Hall, but one person was sleeping on the wet sidewalk
by Alex Darocy Saturday Nov 26th, 2016 4:26 PM 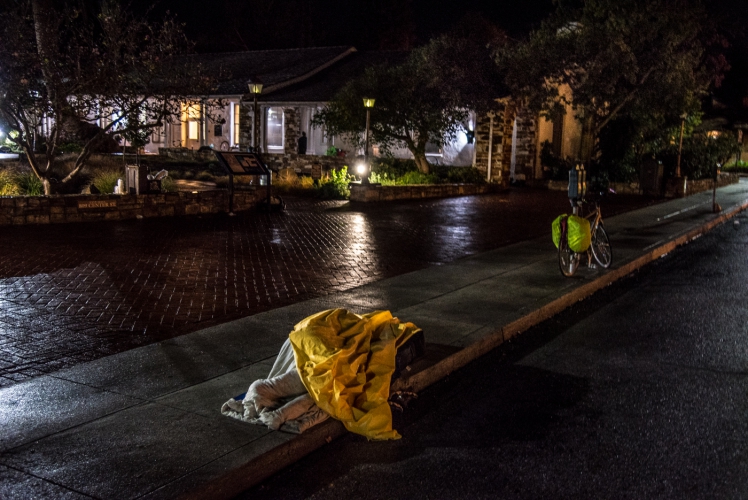 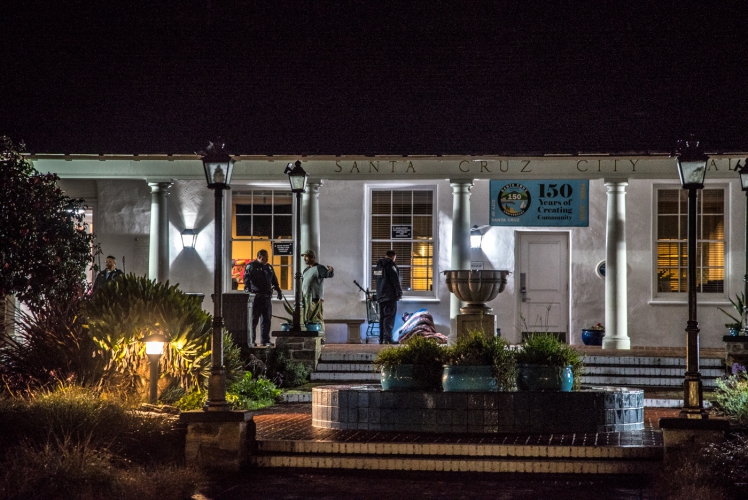 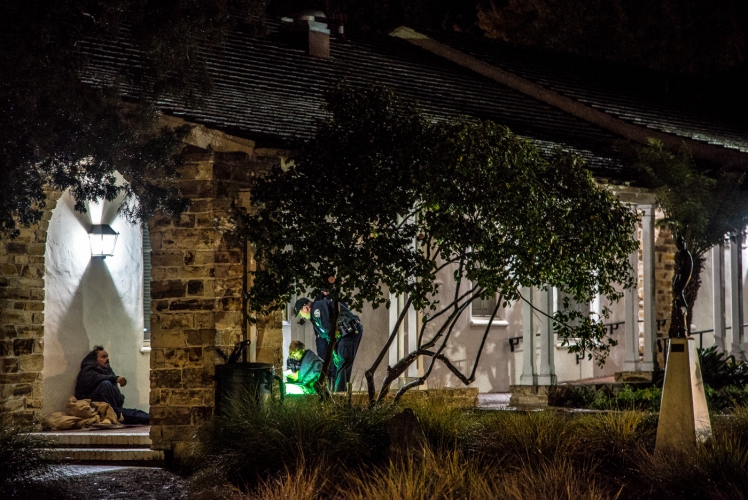 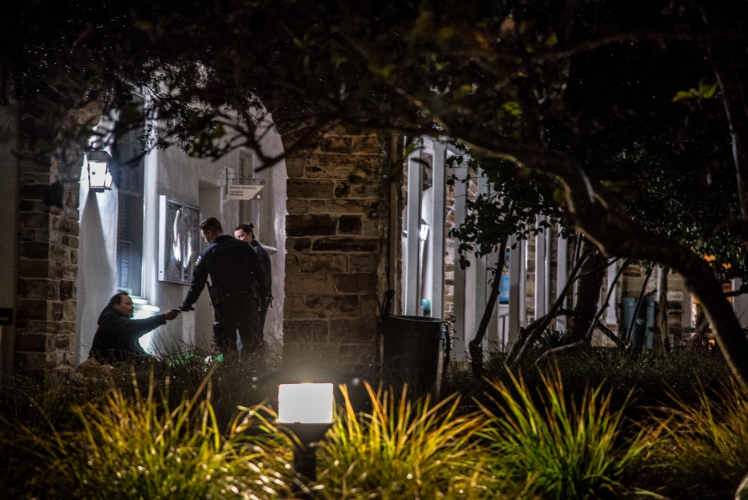 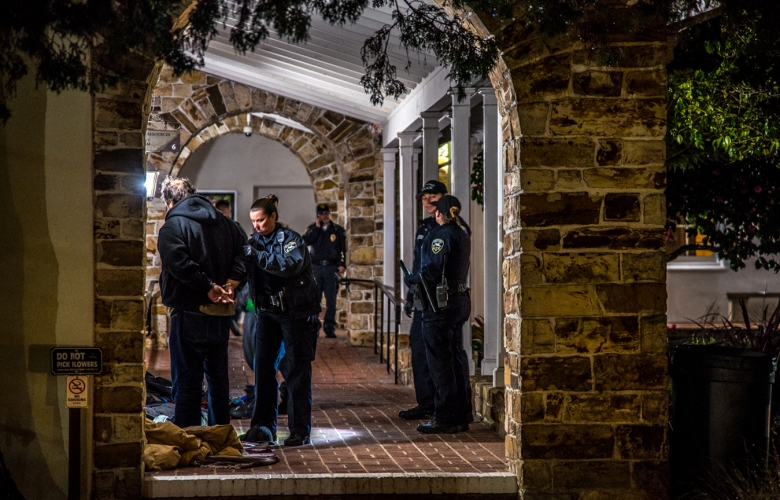 original image (1349x864)
§As one person is arrested, another moves their possessions onto the sidewalk
by Alex Darocy Saturday Nov 26th, 2016 4:26 PM 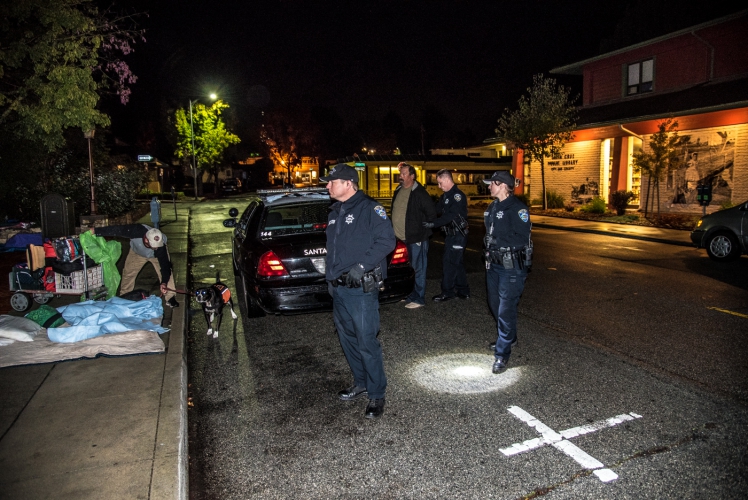 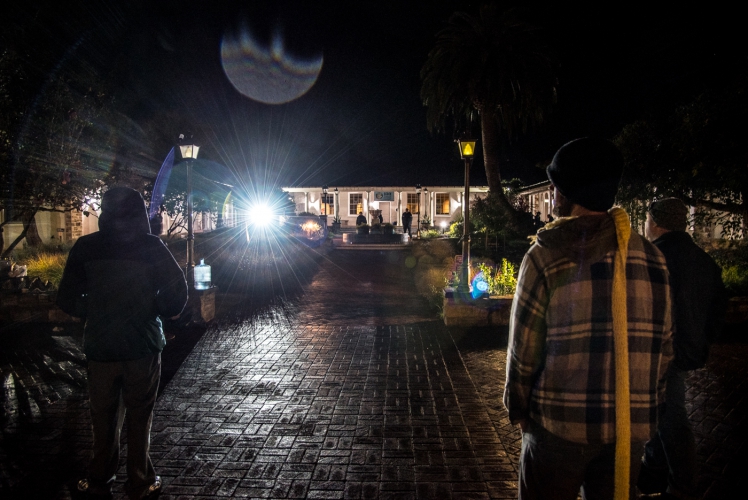 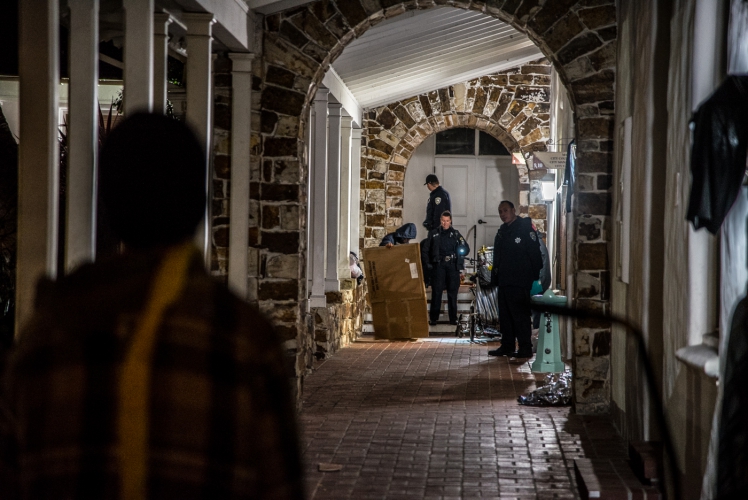 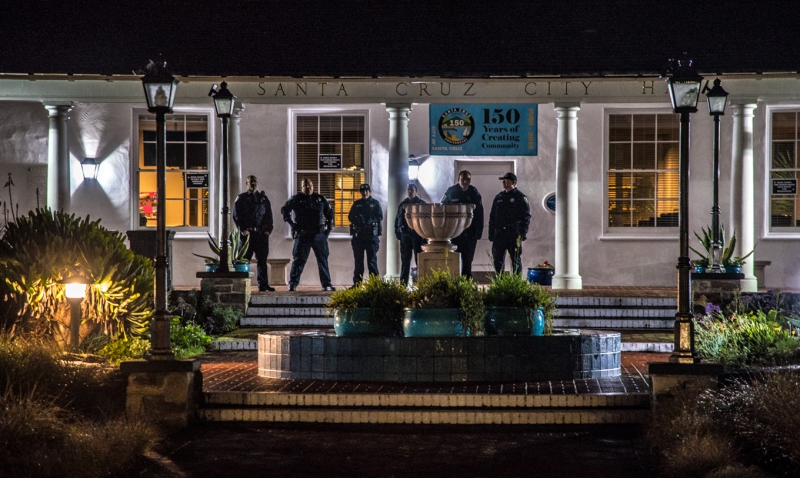 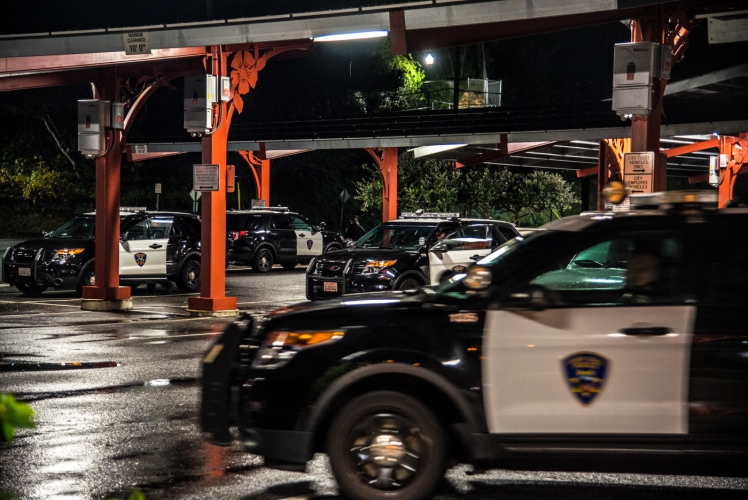 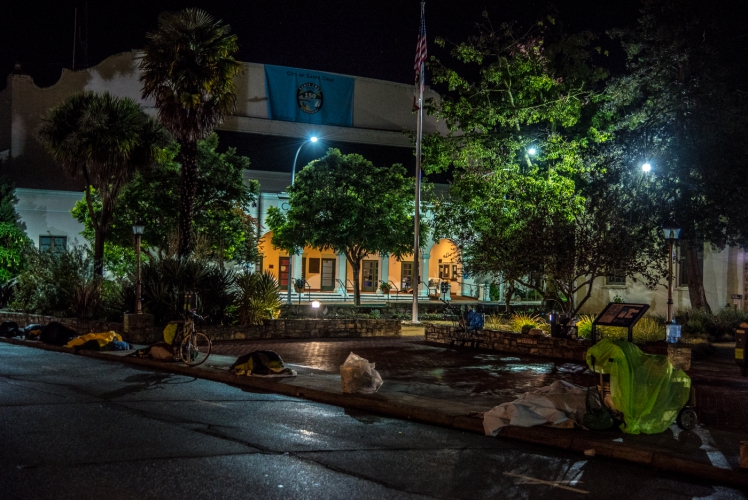 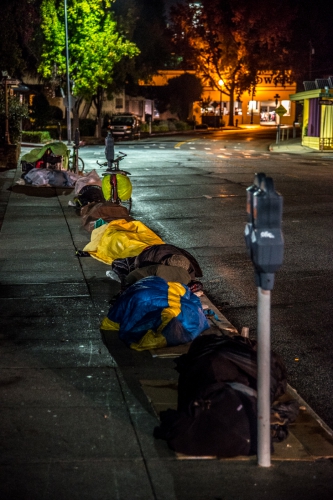 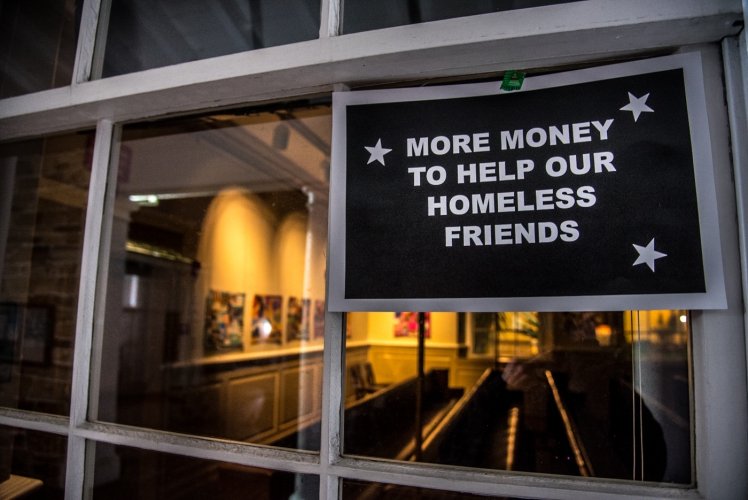 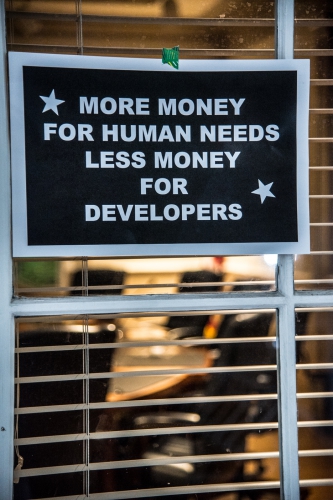 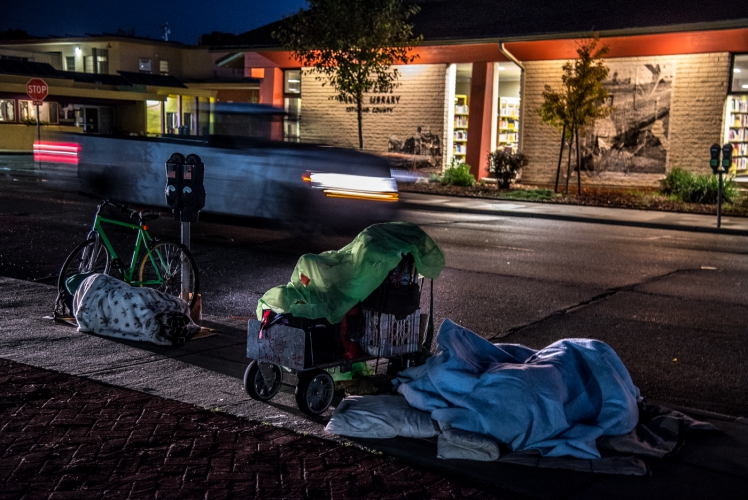 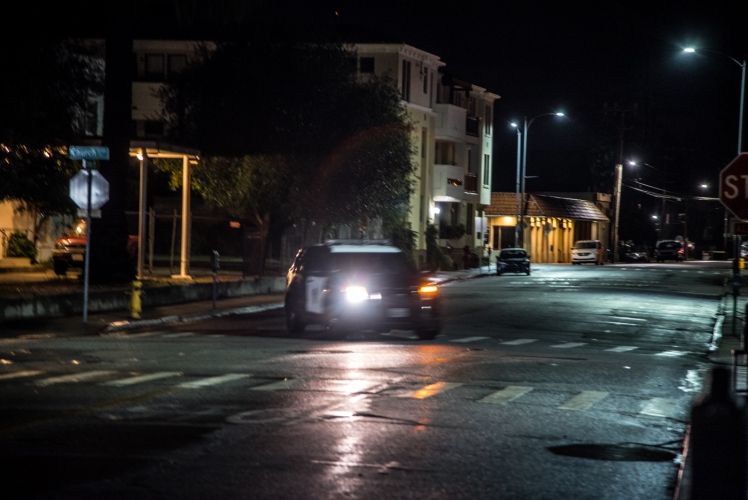 original image (1400x935)
Add Your Comments
LATEST COMMENTS ABOUT THIS ARTICLE
Listed below are the latest comments about this post.
These comments are submitted anonymously by website visitors.