Add an Event
Newswire
Calendar
Features
Home
Donate
From the Open-Publishing Calendar
From the Open-Publishing Newswire
Indybay Feature
Publish to Newswire
Add an Event
Related Categories: Santa Cruz Indymedia | Government & Elections | Health, Housing & Public Services | Police State & Prisons
Freedom Sleepers Anniversary: One Year of Protesting the Sleeping Ban at City Hall
by Alex Darocy (alex [at] alexdarocy.com)
Saturday Jul 9th, 2016 5:18 PM
The Freedom Sleepers celebrated their one-year anniversary together on July 5 with a march through downtown Santa Cruz, and then an outdoor movie screening at Santa Cruz City Hall. The Freedom Sleepers have been sleeping for one night a week at city hall since July 4, 2015 to protest local laws that criminalize homelessness. Their primary demand has been for a repeal of the city's camping ban, which prohibits sleeping in public, with or without bedding, between the hours of 11pm and 8:30am. The camping ban also prohibits sleeping in cars. [Top photo: The Freedom Sleepers watch "Blazing Saddles" during their anniversary sleepout on July 5. Scroll down for more photos from the sleepout.] 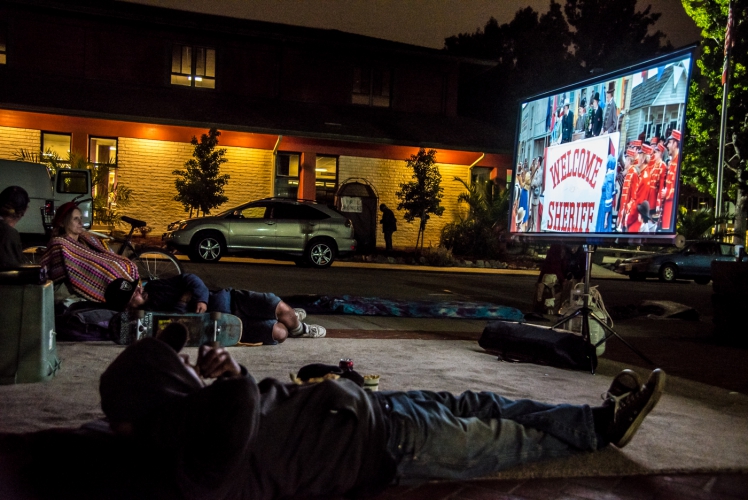 original image (1400x935)
The march was lively and drew quite a bit of attention from onlookers downtown. One passerby agreed with the group's message after hearing their loud protest chants opposing the "sleeping" ban, which is how many homeless activists refer to the illegal camping ordinance.

"That's right," she exclaimed loudly. "Sleeping should not be illegal!"

Some of the signs held by participants in the march honored homeless individuals who had passed away during the course of the sleepouts.

Another sign displayed a photomontage of Chris Bezore, who passed away in March of this year. He was the son of well known local writer Buzz Bezore. Chris was a regular participant at the sleepouts, though he most likely never referred to himself as a "Freedom Sleeper."

Some individuals have joined the the sleepouts for social reasons, and to seek out community, and the company of other people. Many also prefer to sleep with a group at night for safety reasons. Some desperately in need of services, and join the sleepouts looking for food, clothing, or some form of bedding.

Chris Bezore had severe health issues and he used a wheelchair. During one of the sleepouts he openly defied the police and continued to sleep at city hall unabated as the officers cited others.

The sleepouts have involved numerous types of civil disobedience.

Initially, the majority of participants chose to sleep in the park-like setting of the city hall grounds, which is a no-trespassing zone between the hours of 10pm and 6am. For several months the city and the police expended a great deal of energy and financial resources into clearing city hall's grounds of the Freedom Sleepers during their sleepouts.

A large number of individuals received citations for trespassing and some were arrested.

Most of the Freedom Sleepers now sleep on the narrow strip of public sidewalk in front of city hall, which is a strategy organizers developed before the sleepouts began. Activists researched zoning maps and discovered the sidewalk area surrounding city hall is one of the only areas in downtown Santa Cruz that is exempt from the city's sit-lie law.

At city hall, the only enforcement options left for police is to cite individuals under the camping ban, which they seem reluctant to do. Many of the Freedom Sleepers actually want to be cited for sleeping so that they can fight the camping ban in court.

On the evening of their anniversary sleepout, the Freedom Sleepers rented a video projector and a movie screen. At about 10pm they watched the film "Blazing Saddles" together in front of City Hall. The story of a corrupt town council was acutely appreciated by the sleepers, who stayed after the movie for their 52nd community sleepout.

The screening itself was also an act of civil disobedience, as even the open brick area directly adjacent to city hall's front sidewalk is considered part of the no-trespassing zone.

The community sleepouts were first initiated in response to an announcement from the Homeless Services Center (HSC) in Santa Cruz in June of 2015 that there would soon be a reduction of homeless services due to some extreme budget issues they were experiencing.

Two emergency breakfasts were organized near the Homeless Services Center, which led to the planning of the first sleepout to be held on the Fourth of July at Santa Cruz City Hall.

As the sleepouts progressed, the group named themselves the Freedom Sleepers through a consensus process.

Robert Norse of Homeless United for Friendship and Freedom (HUFF), who counted himself as a Freedom Sleeper during the early phase of the sleepouts, has openly critiqued some of the tactical decisions made during the organization of the protests, but also points to some successes.

"It gave homeless people a safe and legal space to sleep for one night a week for 52 weeks," Norse said in an interview following the anniversary sleepout.

He said the tactics employed at the sleepouts led to the development of a legal strategy for people seeking to sleep safely in public.

"They [the Freedom Sleepers] provided a sleeping space for as many people who wanted to come and sleep on the sidewalk with them," he said.

One other outcome of the sleepouts, according to Norse, is that they exposed the city and the Santa Cruz Police Department for ticketing people the other six nights a week for sleeping on public property, which is exactly the same thing the Freedom Sleepers have been doing.

This has been evident at several locations downtown where people had regularly been sleeping in groups until police cleared them out in January and February of 2016: the Santa Cruz Public Library, the Greek Orthodox Church, and the Post Office.

"This is the real Sanctuary Village," one organizer said, referring to the people sleeping at the anniversary sleepout.

The activist, who prefers to remain anonymous, shares Robert Norse's belief that for one night a week the Freedom Sleepers have created a safe space to sleep downtown where people have, for the most part, have avoided being cited by Santa Cruz police.

Proponents of a "Sanctuary Village" have been advocating for a plan to establish a legal homeless camp in Santa Cruz since 2013, but have gained little traction in their appeals to governmental bodies. Many Freedom Sleepers believe that the creation of a small-scale institutionalized camp would do little to end the criminalization of homelessness. The number of spaces for individuals to sleep would be relatively low under this model, compared to the number of people being cited for sleeping in public spaces.

Statistics are kept separately on the amount of citations issued under the camping ban by park rangers employed by the City of Santa Cruz Parks and Recreation Department.

In 2013, assistant city manager Tina Shull told the press that nuisance crimes related to homelessness were costing the city one million dollars per year in police costs alone, according to her estimates.

Several of the activists involved with the Freedom Sleepers have advocated for a different "camp" model that would open up entire parks and public spaces. One concept that was introduced to the public by Rabbi Phil Posner and Steve Pleich as a "camp of last resort" is now called the Santa Cruz Homeless Depot Shelter program. Supporters are calling for a pilot program to designate, "one or more," of the city's parks as a location where individuals may sleep legally and safely for the night. They also want the city and county to pay for tarps, tents, or some other form of public shelter and bathroom facilities.

Rabbi Phil has explained that, "in proposing this partial solution to homelessness in Santa Cruz, we appreciate that there are community programs that are successfully providing other forms of housing and shelter and see the idea of a public camp site as augmenting those important programs."

Many of the Freedom Sleepers have advocated for specific projects to increase services provided for the homeless by governmental bodies, such as the campaign to open city hall's public restrooms 24 hours a day.

The principle demand of the Freedom Sleepers, however, has always been to repeal the sleeping ban.

The issue was directly addressed on March 8 of this year when some members of the Santa Cruz City Council brought the camping ordinance to the council's agenda to possibly remove the references to the prohibition of sleep from the law's verbiage.

Some of the Freedom Sleepers supported the proposed changes to the ordinance, and spoke before the council, but others felt the changes didn't go far enough, and most didn't pay much attention to the meeting at all.

The city council voted to maintain the present wording of the camping ban, but many still see it as a small victory for the Freedom Sleepers. It was the first time the camping ban had truly been considered by the council for repeal.

According to Robert Norse, a slate of candidates elected to the Santa Cruz City Council in the late 1990s ran on a campaign platform of reforming the camping ban, but once they were elected they only followed through by passing some minor changes to the law.

The Freedom Sleepers have said they will continue to oppose the camping ban, and recent statements made by some activists indicate they plan to continue to organize the sleepouts at city hall for some time to come. 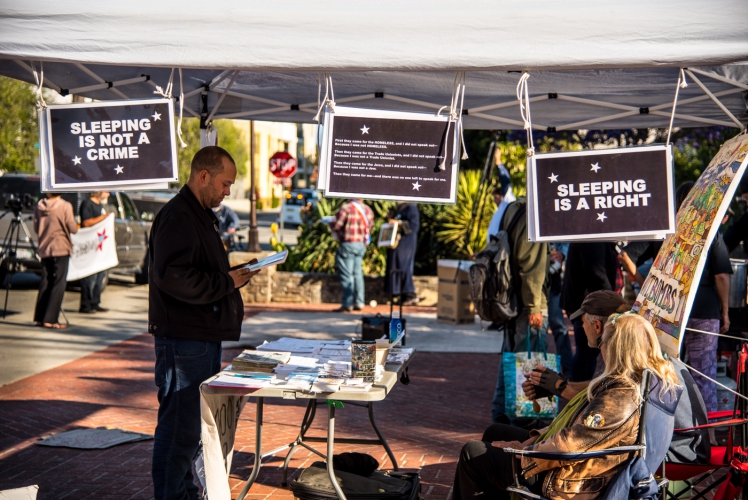 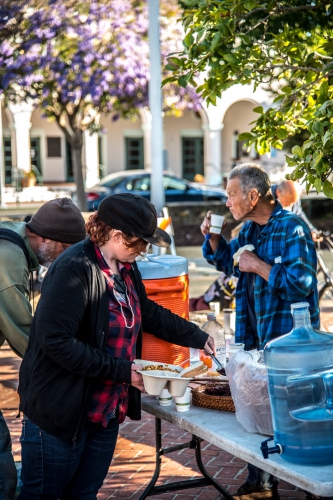 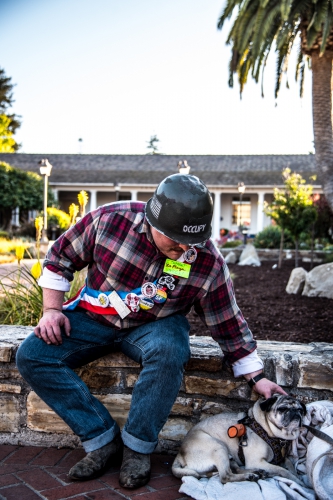 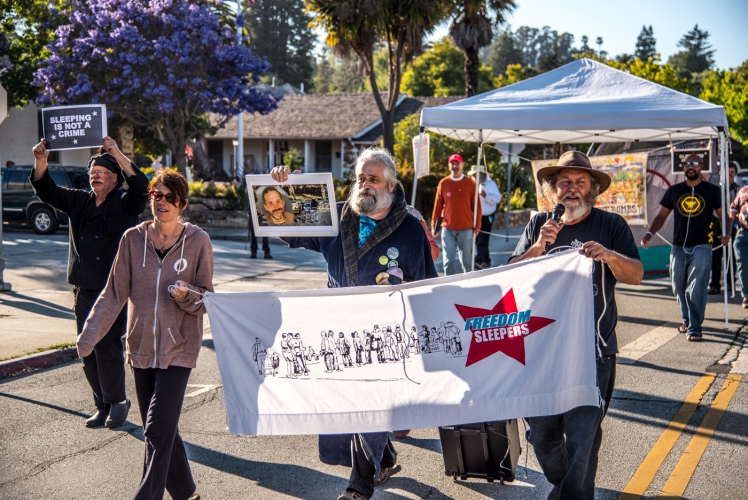 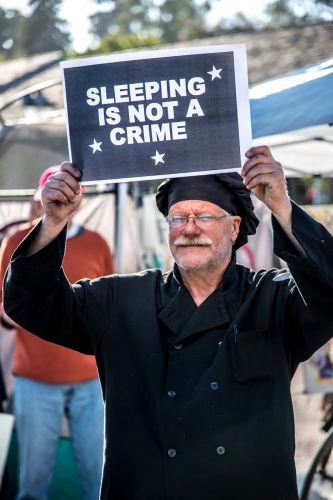 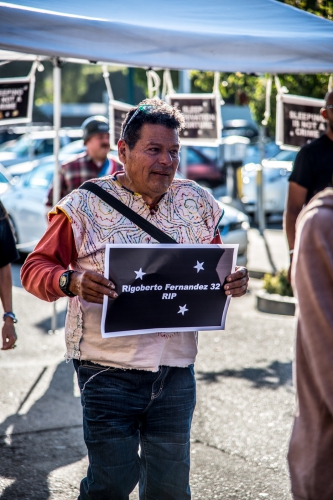 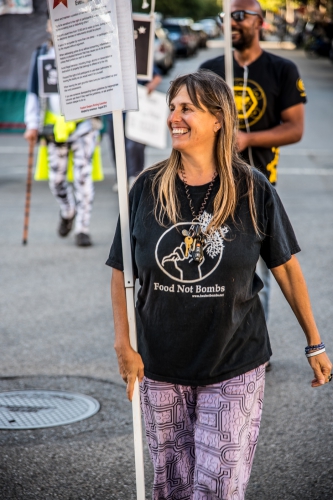 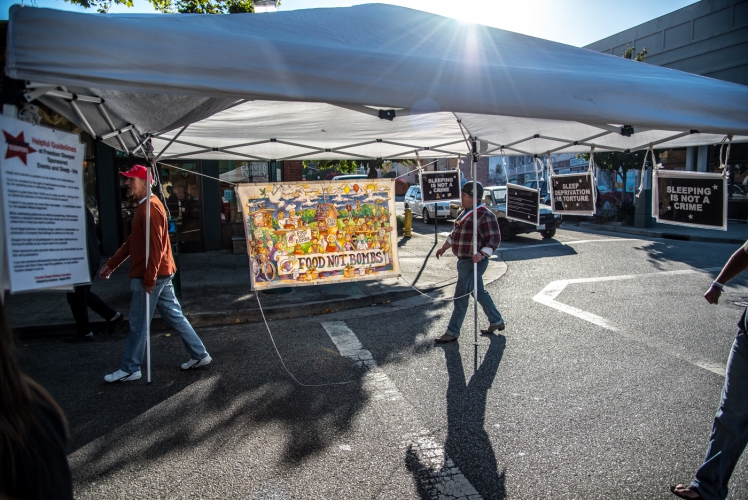 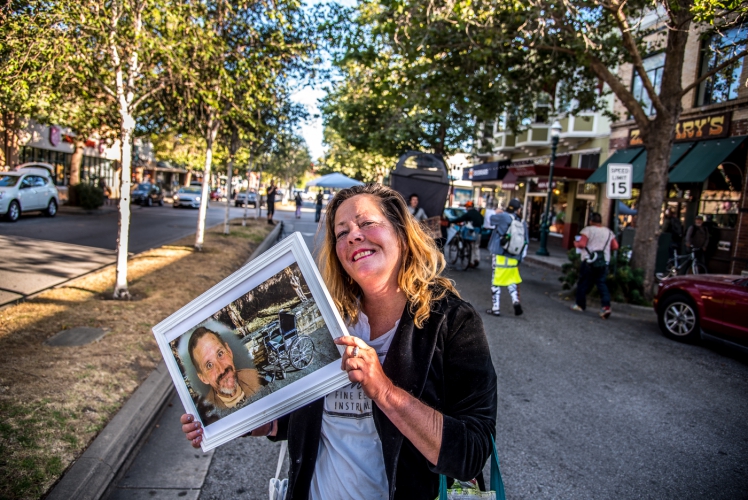 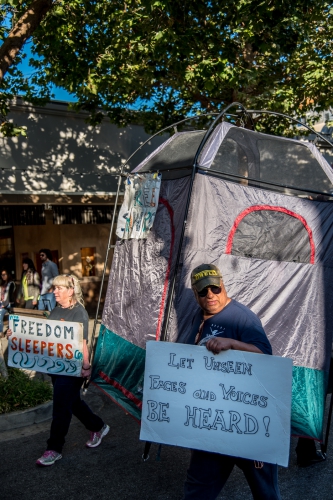 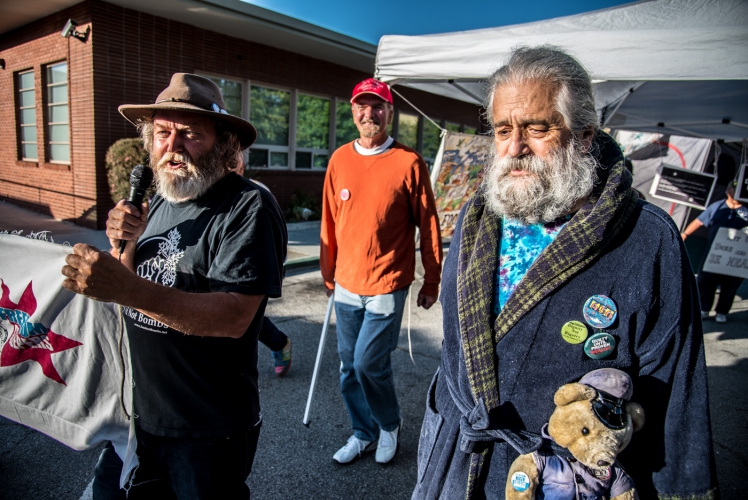 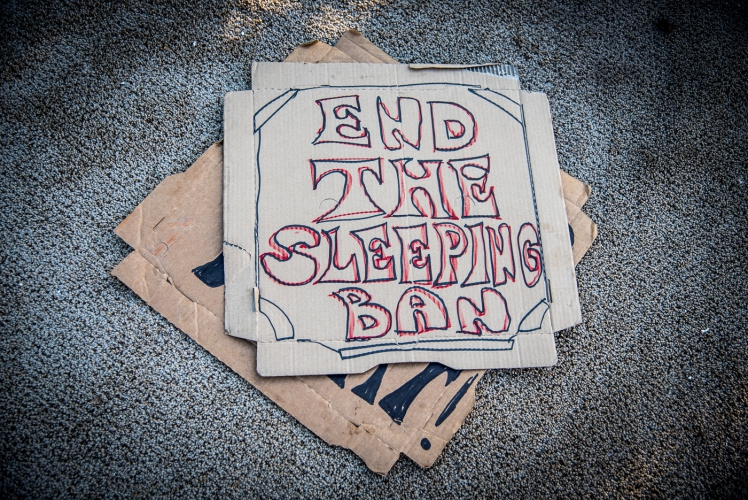 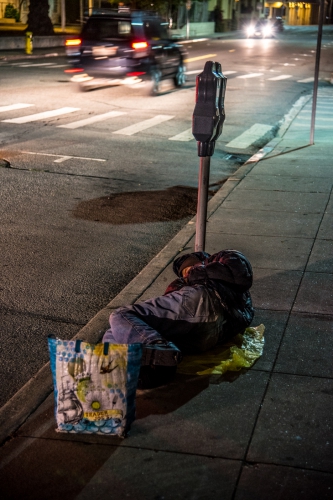 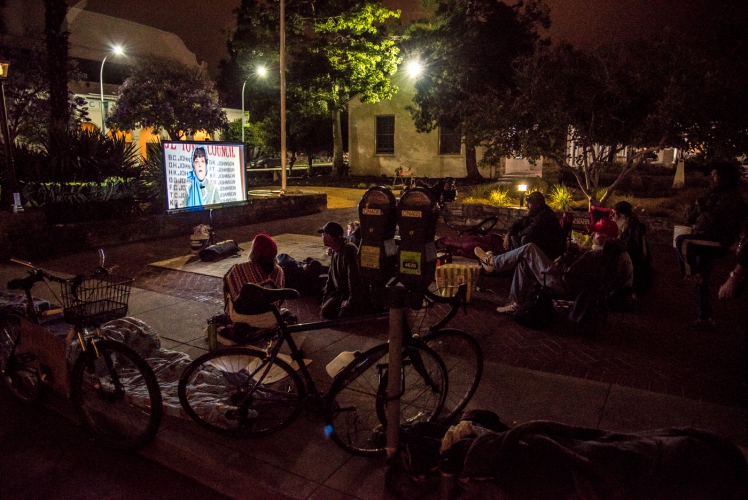 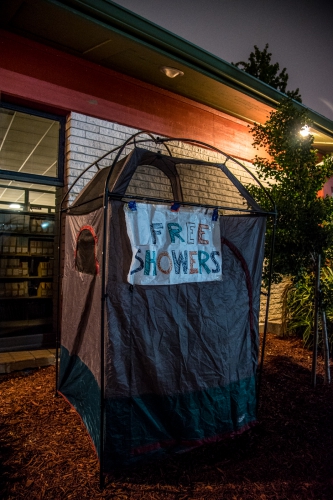 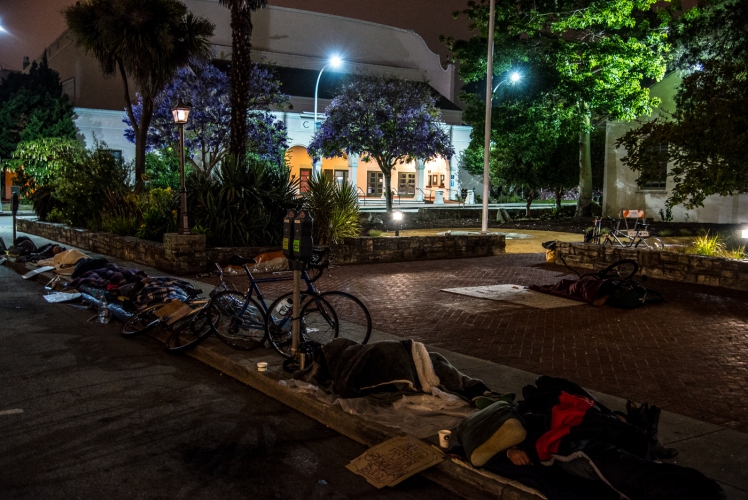 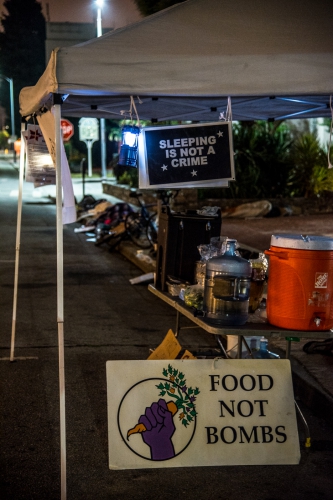 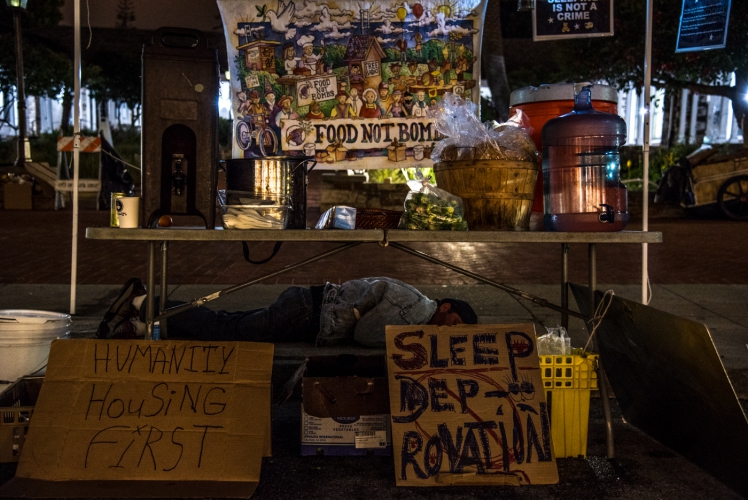 original image (1400x935)
Add Your Comments
Support Independent Media
We are 100% volunteer and depend on your participation to sustain our efforts!