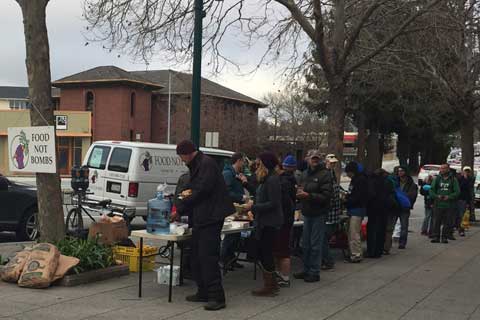 Keith McHenry writes: The most common government response to the suffering of those being forced into homelessness is the passage of laws against being homeless. Laws against sleeping, sitting, asking for money, living outside, or what officials call “quality of life crimes” make this bad situation even worse, and make the lives of homeless men, women, and children even more miserable.

Another aspect of this punitive response to homelessness is passage of laws prohibiting the public sharing of meals with the hungry. The hope is that hiding from public view the problem of homelessness will make it go away. This is an all too common tactic in cities across the country. Over 70 have passed laws that ban or place restrictions on the public sharing of meals. Orlando, Florida has a twice-a-year limit per park on providing free meals to the hungry. Ft. Lauderdale restricted the meals by requiring a permit and making it illegal to provide meals within 500 feet from any building, and provide toilet facilities, essentially eliminating all possible locations and making it impossible to comply with the permit restrictions. To justify all this, municipal authorities are citing a new theory that claims that “street feeding is unproductive, very enabling, and it keeps people out of [substance abuse] recovery programs.”

One of those seeking to drive the homeless and groups that share food from public sight, and to make public food sharing impossible, is Janet Fardette, founder of the Leveelies — a group of volunteers that pick up trash along the San Lorenzo River levees in Santa Cruz, California. In her 2009 letter to the local paper, “Time to take back downtown Santa Cruz,” she wrote, “Our city no longer belongs to us. It has been taken over by drug addicts, homeless, panhandlers and the like.”