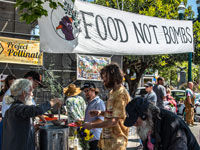 On May 24, the 35th anniversary of Food Not Bombs was marked with a six hour party in Santa Cruz. Those needing nourishment were greeted with live music and an especially celebratory atmosphere, in addition to free food, a free market, and a variety of other free services.

By combining social and environmental justice activism, nonviolent direct action, and a philosophy that emphasizes sharing over charity, Food Not Bombs has differentiated itself from other global organizations that distribute food to the hungry. The organization is comprised of hundreds of autonomous, volunteer-supported chapters that share free vegetarian meals with the hungry around the globe. There are no leaders running Food Not Bombs; local groups use the consensus process.

Hundreds of meals were shared over the course of the six hour celebration in Santa Cruz. A private solar shower booth was set up, and stylists cut people's hair for free. Books, clothing, and plant starts were available as part of the free market. A number of bands and musicians performed together and separately, and social justice organizations set up informational tables. Food Not Bombs co-founder Keith McHenry was in attendance, and his birthday was also incorporated into the celebration. Food Not Bombs volunteers joined hands with other revelers to capture and roll McHenry into a giant human cinnamon bun.