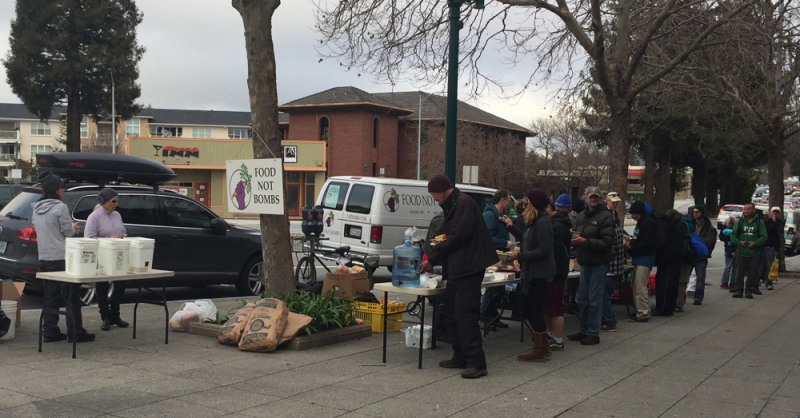 original image (1000x523)
Even though I have shared meals with the hungry for over 35 years, in a time of ever-rising profit and productivity, the numbers of the hungry and homeless have risen, not fallen, over that time. In many of our cities, it feels as if we’re still living in the Great Depression.

The National Center on Family Homelessness published a study in 2014, based on a calculation using the most recent data from the U.S. Department of Education and the 2013 U.S. Census, which found that “2.5 million children in America—one in every 30 children—go to sleep without a home of their own each year.” A society that lets a over two million children live on it’s streets is a society that is collapsing.

The most common government response to the suffering of those being forced into homelessness is the passage of laws against being homeless. Laws against sleeping, sitting, asking for money, living outside, or what officials call “quality of life crimes” make this bad situation even worse, and make the lives of homeless men, women, and children even more miserable.

Another aspect of this punitive response to homelessness is passage of laws prohibiting the public sharing of meals with the hungry. The hope is that hiding from public view the problem of homelessness will make it go away. This is an all too common tactic in cities across the country. Over 70 have passed laws that ban or place restrictions on the public sharing of meals. Orlando, Florida has a twice-a-year limit per park on providing free meals to the hungry. Ft. Lauderdale restricted the meals by requiring a permit and making it illegal to provide meals within 500 feet from any building, and provide toilet facilities, essentially eliminating all possible locations and making it impossible to comply with the permit restrictions. To justify all this, municipal authorities are citing a new theory that claims that “street feeding is unproductive, very enabling, and it keeps people out of [substance abuse] recovery programs.”

One of those seeking to drive the homeless and groups that share food from public sight, and to make public food sharing impossible, is Janet Fardette, founder of the Leveelies — a group of volunteers that pick up trash along the San Lorenzo River levees in Santa Cruz, California. In her 2009 letter to the local paper, “Time to take back downtown Santa Cruz,” she wrote, “Our city no longer belongs to us. It has been taken over by drug addicts, homeless, panhandlers and the like.”

One can understand her annoyance. It must be frustrating to property owners to see an ever increasing number of people seeking shelter in doorways, sidewalks, and along the levee. Seeing people living outside, near or on their properties must be disheartening.

As part of her campaign to drive the “homeless problem” out of sight–including an online petition, phone calling local officials and the police, and speaking out during the public comment portion of a board of supervisors meeting–Ms. Fardette suggested that officials look into “Robert Marbut’s widely successful” theory, mentioned in the NPR story “More Cities Are Making It Illegal To Hand Out Food To The Homeless” that feeding homeless people helps to keep them homeless.

Marbut puts it this way: “Street feeding is one of the worst things to do, because it keeps people in homeless status. I think it’s very unproductive, very enabling, and it keeps people out of [substance abuse] recovery programs.”

Marbut’s proposed way to end homelessness focuses on correcting the behavior of those forced to live on the streets, treating people as though they were naughty children. A failing economic and political system with low paying jobs, high rents, underfunded education, and little access to both physical and mental health services isn’t the culprit. Rather, as outlined in his “Guiding Principles” for solving the problem of homelessness, it’s the homeless peoples’ bad behavior that keeps them from being able to pay for housing.

* “Positive behavior should be rewarded with increased responsibilities and more privileges. Privileges such as higher quality sleeping arrangements, more privacy and elective learning opportunities should be used as rewards.”

* “Too often there are no consequences for negative behavior. Unfortunately, this sends a message that bad behavior is acceptable. Within the transformational process, it is critical to have swift and proportionate consequences.”

The last Guiding Principle is “Panhandling Enables the Homeless and Must Be Stopped.”

Marbut’s program might not be as successful as those who cite him hope. The Rivard Report’s February 10, 2016 article and video, “No End in Sight for Homeless Camps in San Antonio,” claims that Marbut’s theory has not been as effective as promised even in his own home town. After ten years of implementing Marbut’s program via Haven for Hope of Bexar County, there are still thousands of people living outside.

Those promoting his approach may have big hearts, and if Marbut’s theory worked it would be great. But Marbut’s theory is not working for most people in the cities that have hired his services.

The Associated Press cited a case in point in a September 2011 story on homelessness in St. Petersburg, Florda:

“St. Petersburg’s struggles with some of the most rampant homelessness in the country reached a crescendo when police officers with box cutters slashed up a makeshift tent city near downtown.

“Enter Robert Marbut, a former San Antonio councilman and White House staffer who came to town last fall wielding what he likes to call a “velvet hammer.” City leaders hired the $5,300-a-month consultant after buying into his idea of forcing the homeless off the streets but taking them someplace better — a sprawling, one-stop complex where people could be housed, fed and start to get help with mental illness, addictions and the other problems that put them on the streets.

“More than a just big shelter, it would be a ‘transformational campus’ like the one Marbut helped establish in San Antonio.

“Marbut was the architect and first CEO of a similar shelter compound in San Antonio called Haven for Hope. The 22-acre, $100 million complex with room for about 1,000 was built with private and public money. It opened last year and is filled to capacity.”

This means that some, probably a great many, are not being helped on Marbut’s home turf. They’re still out on the streets — and hungry.

The Tampa Bay Times reports that “St. Petersburg Mayor Bill Foster has said the city will eventually begin arresting homeless people who sleep in parks or on public rights of way, with Safe Harbor [a 'transformational' jail] an eventual destination for them.”

Balch told AZ Family, “’[Our] mission is to educate faith and community-based groups about why street feeding can do more harm than good.’ Balch said that giving someone a meal will encourage them to stay on the street and wait for another one.”

It is clear that blaming the victim isn’t working, especially given the inadequate, underfunded programs to help the homeless. Hundreds of people still live outside in St Petersburg, Ft Lauderdale, San Antonio and the other cities that have adopted Marbut program, and many homeless people still rely on the outdoor meals shared by Food Not Bombs and other groups.

While it is great that some people in some cities have transitioned into homes through the shelters and programs inspired by Marbut, the number of people living on the streets in those cities has continued to increase.

Those who would like the homeless crisis to disappear from Santa Cruz are lobbying officials to adopt Marbut’s approach and drive Food Not Bombs and its free meals from public view. (The $5,300 a month they might spend on hiring Marbut could be much better spent on maintaining 24 hour bathrooms. That would improve the lives of the homeless.)

Food Not Bombs is not a charity. We share our vegan meals in the most visible locations possible with signs and literature encouraging the public to support social and political change so that no one is forced to live on the streets or depend on soup kitchens for food. We can end homelessness if we just divert some of the hundreds of billions of dollars spent every year preparing for war, and instead spend that money on the real national security of a living wage, affordable housing, guaranteed work for those who want it, and high quality education and healthcare for all.

Blaming the homeless for their condition is clearly not working.


SIGN OUR PETITION – Support the right of Food Not Bombs to share free food, info and ideas in Santa Cruz:
https://www.change.org/p/support-the-right-of-food-not-bombs-to-share-free-food-info-and-ideas-in-public-spaces-in-sc/

Food Not Bombs
http://www.foodnotbombs.net/
Add Your Comments
LATEST COMMENTS ABOUT THIS ARTICLE
Listed below are the latest comments about this post.
These comments are submitted anonymously by website visitors.