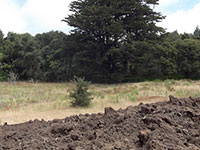 Save the Knoll writes: As few in Santa Cruz are currently aware, a developer has been in the process of destroying a beautiful wild area in Santa Cruz, locally known as "Market Street Field", which is also the location of a 6,000 year old Native American burial and village site. The project is a 32-unit residential subdivision called "Branciforte Creek - the Comfort of Green Living".

Market Street Field is a beautiful place, one of few remaining wild enclaves within the City of Santa Cruz. For as long as anyone can remember, people have been visiting the meadow, admiring wildflowers, sitting under oak trees, walking their dogs, playing in Branciforte Creek and gathering medicinal plants at the creekside. As it turns out, Native Americans have a relationship with this place that dates back much further than most people can really comprehend. Archeologists have estimated through radiocarbon dating that the site is in excess of 6,000 years old.

Both the City and KB Home are well aware of the cultural significance of the site. A 2006 developer-commissioned archeological study states that despite disturbance from historic house and road construction, "SCR-276 is possibly one of the sites least impacted by existing urban development within the City of Santa Cruz." Former City Planning Commissioner Judy Warner stated just before voting to approve the Branciforte Creek development that "this is the oldest and most significant cultural area in the city." Despite this, the City has permitted KB Home to conduct digging, grading, and construction within the boundaries of the known culturally sensitive area.

Save the Knoll | Petition: City of Santa Cruz: Protect the Ohlone village and burial site at Branciforte Creek