Add an Event
Newswire
Calendar
Features
Home
Donate
From the Open-Publishing Calendar
From the Open-Publishing Newswire
Indybay Feature
Publish to Newswire
Add an Event
Related Categories: Santa Cruz Indymedia | Racial Justice
Save the Knoll Gathering at Grant Street Park
by ~Bradley (bradley [at] riseup.net)
Monday Aug 22nd, 2011 1:34 PM
On August 21st, dozens of people participated in an informational social gathering and barbecue hosted by the Save the Knoll Coalition at Grant Street Park in Santa Cruz. The Knoll is part of a wild area in Santa Cruz, locally known as Market Street Field at Branciforte Creek, which is also the location of a 6,000 year old Native American burial and village site. Despite the Knoll's cultural significance, it is threatened with imminent development by KB Home as part of a 32-unit residential subdivision being advertised as "Branciforte Creek - the Comfort of Green Living".

Indigenous Ohlone peoples were the featured speakers at the gathering, including Ann Marie Sayers, who as been designated as the "Most Likely Descendant" (MLD) of native peoples who have been dug up during the construction which has already begun, and Charlene Sul, an artist, activist and newly-appointed professor at CSU Monterey Bay. 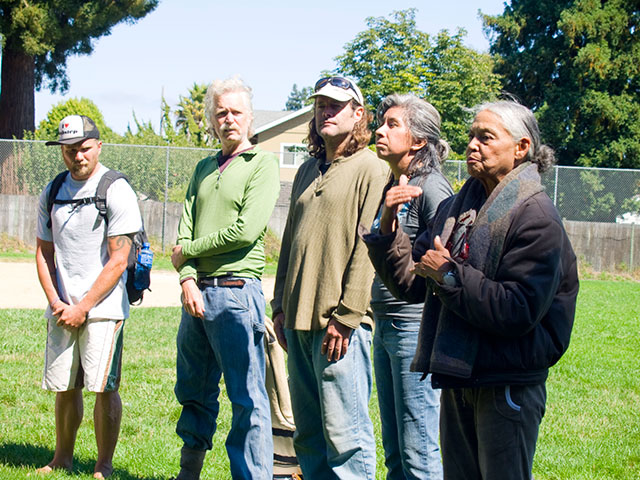 A member of the Save the Knoll Coalition reported that on August 19th, two days prior to the gathering, sixteen people woke up early in Santa Cruz and drove out to KB Home Northern California’s headquarters in Pleasanton to deliver a demand letter on behalf of the Coalition.

The unexpected visitors filled the small KB Home lobby, and a perplexed secretary called division president Chris Apostolopoulos. “I think you better come up here”. A few minutes later, Mr. Apostolopoulos himself entered the lobby, with two other KB Home representatives. Appearing quite nervous, they were handed six copies of the demand letter.

A group representative informed them that “We have a large group of people closely watching the activity of KB Home around this development, and we’re willing to take further action if the wishes of the native people aren’t respected.”

For background information, breaking news, and ways to get involved in the ongoing efforts to save the Knoll, visit the coalition's website at SaveTheKnoll.org
http://bradleystuart.net
§Charlene Sul
by ~Bradley Monday Aug 22nd, 2011 1:34 PM 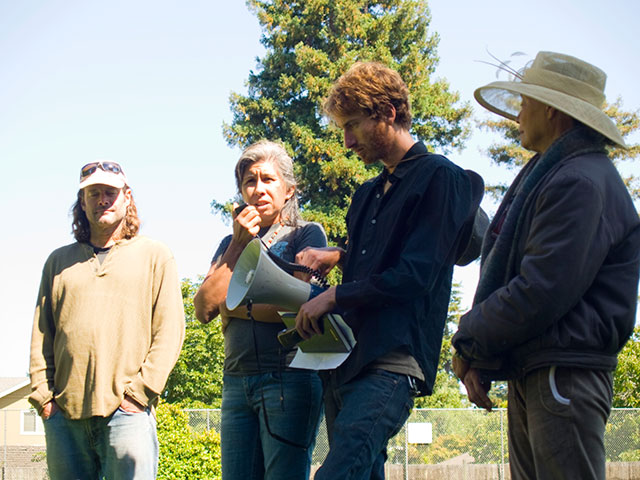 http://bradleystuart.net
Add Your Comments
Support Independent Media
We are 100% volunteer and depend on your participation to sustain our efforts!