Add an Event
Newswire
Calendar
Features
Home
Donate
From the Open-Publishing Calendar
From the Open-Publishing Newswire
Indybay Feature
Related Categories: Santa Cruz Indymedia | Racial Justice
Protect Sacred Places: KB Home disturbs Native American human remains in Branciforte Area
by Save the Knoll
Saturday Aug 13th, 2011 5:57 AM
As few in Santa Cruz are currently aware, a developer has been in the process of destroying a beautiful wild area in Santa Cruz, locally known as "Market Street Field", which is also the location of a 6,000 year old Native American burial and village site. The project is a 32-unit residential subdivision called "Branciforte Creek - the Comfort of Green Living".

Market Street Field is a beautiful place, one of few remaining wild enclaves within the City of Santa Cruz. For as long as anyone can remember, people have been visiting the meadow, admiring wildflowers, sitting under oak trees, walking their dogs, playing in Branciforte Creek and gathering medicinal plants at the creekside. As it turns out, Native Americans have a relationship with this place that dates back much further than most people can really comprehend. Archeologists have estimated through radiocarbon dating that the site is in excess of 6,000 years old.

The City of Santa Cruz first approved the Branciforte Creek Subdivision project in 2007 despite widespread opposition from local residents, environmentalists, archeologists and historic preservationists. KB Home, a Fortune 500 company headquartered in Los Angeles, bought the property from a previous developer in 2010 and in 2011 the city approved their revised plan for a 32 unit residential subdivision they are marketing as "Branciforte Creek - The Comfort of Green Living".

A Place to be Honored and Protected

Both the City and KB Home are well aware of the cultural significance of the site. A 2006 developer-commissioned archeological study states that despite disturbance from historic house and road construction, "SCR-276 is possibly one of the sites least impacted by existing urban development within the City of Santa Cruz".1 Former City Planning Commissioner Judy Warner stated just before voting to approve the Branciforte Creek development that "this is the oldest and most significant cultural area in the city"2 Despite this, the City has permitted KB Home to conduct digging, grading, and construction within the boundaries of the known culturally sensitive area.

Noting "significant impacts to the integrity of a recorded archaeological resource", the Environmental Impact Report defines mitigation measures that are outrageously inadequate. The report reads, "Subsurface work within the boundaries of CA-SCR-276 will be conducted with the appropriate equipment and speed to allow for the recovery of archaeological materials."3 Contractors are to be be given a "sensitivity training" and homes built on the cultural site will be constructed with a "special foundation" rather than a concrete slab.

In July, Archeologist Sarah Brewer wrote a letter to the City of Santa Cruz expressing concerns about the adequacy of the mitigation measures and the damage being done to the site by construction activities. She was subsequently fired from her position as an archeological monitor at the site by Michael Brandman Associates, a consulting firm contracted by KB Home.

On or around August 2nd, the travesty of destroying a beautiful, ancient place sunk to another level when the skeletal remains of a young Native American child were dug up during initial work in the northern part of the site, known as "the knoll". In compliance with California law, a stop-work order was then issued for this northern area, and the Native American Heritage Commission was notified, which in turn designated an Ohlone woman, Ann Marie Sayers, as the "Most Likely Descendant" (MLD) for the site.

An MLD makes recommendations to a property owner or developer regarding the treatment of their ancestors' remains and the nature of any future development on a given site. In the case of the Branciforte Creek Subdivision, Ann Marie Sayer's recommendations are that the unearthed individual be reinterred ceremonially, and that there be no more earth movement or development within the known culturally sensitive area (the knoll).

Unfortunately, although the law allows an MLD to make a recommendation, it does not give them the power to enforce it or to stop a development project from proceeding. It is up to us--all those in the local community who respect the rights of indigenous people--to hold developers accountable for their decisions and actions.

The Ohlone are the original inhabitants of the Santa Cruz area, who over thousands of years developed complex cultures that were sustained through a deep relationship with the wildlife and natural resources of the land. The Ohlone people and their ways of life were decimated first by the Spanish invasion and establishment of Mission Santa Cruz in 1791, and later by American settlement and genocidal Gold Rush-era policies toward Indians.

Contrary to popular belief, Ohlone people are very much still alive today, as is their deep relationship with the land of their ancestors. Hard fought battles have been waged and continue to be waged throughout Ohlone territory, to prevent the further destruction of Ohlone sacred places and burial grounds by developers and local governments.

In March of 1975, Ohlone people and other Native Americans carried out an armed occupation of a burial ground in Watsonville, successfully preserving half of the site that had not already been destroyed for the construction of a new warehouse.4 In April of this year (2011), Ohlone and Miwok elders led a 109-day unarmed occupation of a sacred burial ground in Vallejo, stopping the city from constructing bathrooms, a parking lot, and paved trails on top of their ancestors as part of a "park improvement" plan.5

Many Ohlone people today consider the widespread desecration and destruction of their burial grounds and sacred places to be a form of modern-day colonialism. In the words of Corrina Gould, a Chochenyo Ohlone woman who has been very active in protecting Shellmound burial grounds, "What I say about this development that happens all over the Bay Area, is that it's a cultural genocide. They're trying to wipe us out, in a different kind of a way. There's no more monuments of the ancient people, of my ancestors, here in the Bay Area. When people go around to those places to try to find out, who were the native people here, what did they live like? There's nothing here." 6

Not only is this development irreparably destroying our ability to know and connect with the past, it is yet another blow to our collective future, to the world that our children will inhabit. People have been coming for over 6,000 years to this knoll above Branciforte Creek for a reason. They gathered and lived there, because it has always been a place that nourishes living things. KB Home is now in the process of destroying this place to the point of it being unrecognizable.

The good news is that we still have an opportunity to prevent further desecration and disturbance at Market Street. While the southern part of the property has been obliterated and is currently a massive 25-foot deep pit, the northern part of the land, known as "the knoll", remains largely intact. Many trees have been removed from the knoll and an old house has been razed, however, planned grading and construction of seven new homes within the known cultural site has not occurred.

Ann Marie Sayers states that, "…my mother believed, and I believe, that when a burial is disturbed, the spirit of that individual is left wandering." Her recommendation to KB Home and the City of Santa Cruz is very clear: no more earth movement in the known culturally sensitive area. To honor this recommendation, KB Home will have to abandon their planned construction activities on the knoll.

Given the amount of money involved, it seems very possible that KB Home will disregard Ann Marie Sayer's recommendation and continue with construction that is likely to further disturb Ohlone ancestors. As human beings, it is our responsibility to not allow this to happen. Together, we must demand that the rights and dignity of the indigenous people of this land be respected.

This article was reposted from:
http://savetheknoll.org/about/

http://savetheknoll.org/
§"The Comfort of Green Living" ...on the desecrated graves of Native Americans
by Save the Knoll Saturday Aug 13th, 2011 5:57 AM 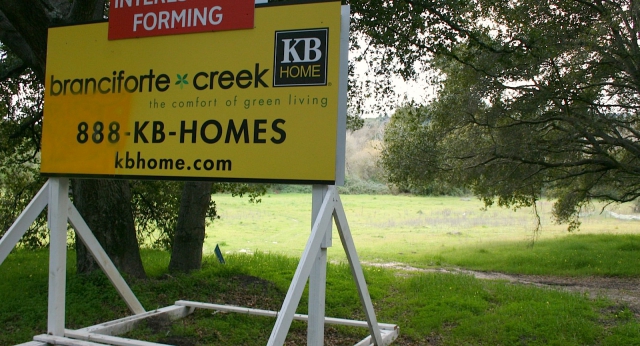 original image (1600x867)
“Branciforte Creek – The Comfort of Green Living” – sign before it was vandalized, and before the developer broke ground. The meadow the background is now mostly destroyed.
http://savetheknoll.org/
§Erasing the past, dulling the future
by Save the Knoll Saturday Aug 13th, 2011 5:57 AM 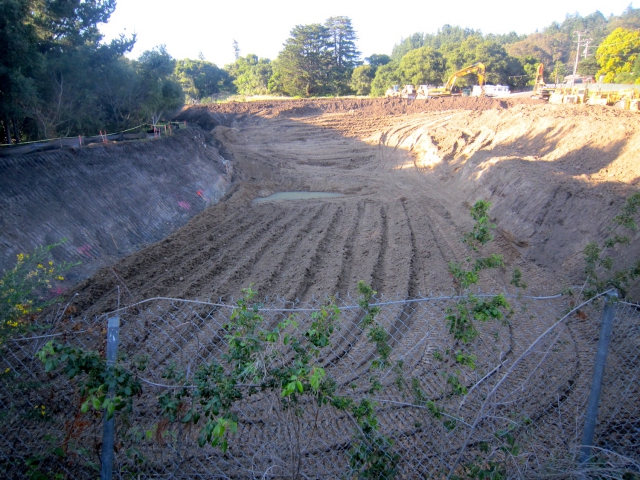 http://savetheknoll.org/
§Looking towards the knoll from Isbel Drive.
by Save the Knoll Saturday Aug 13th, 2011 5:57 AM 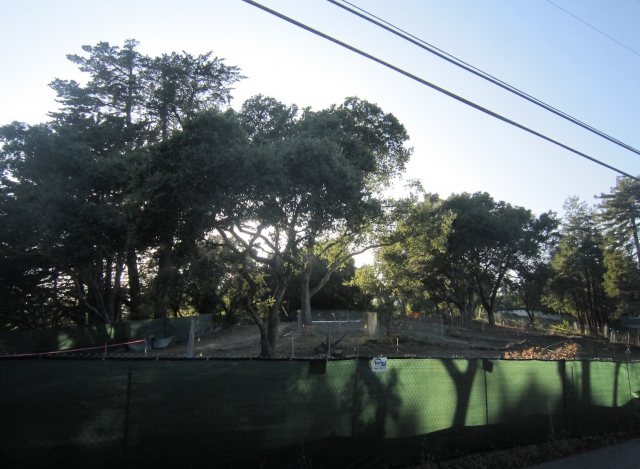 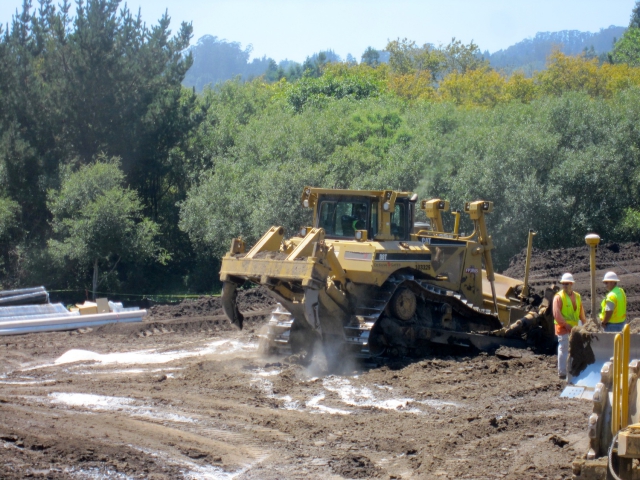