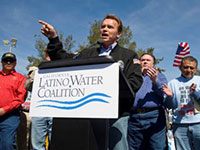 A poorly researched article on California water, the "New Dust Bowl," is online and appeared in the November-December edition of Mother Jones magazine, a publication known for its investigative reporting. Dan Bacher, an Indybay contributor and editor for Fish Sniffer, critiques the article, stating, "The 'New Dust Bowl' sounds just like a headline from the Sean Hannity Show or Fox 'News' - and the article reads like a propaganda piece for growers on the west side of the San Joaquin Valley."

"On the west side of the valley, which is often last in line for deliveries from federal water projects, farmers are selling prized almond trees for firewood, fields are reverting to weed, and farmworkers who once fled droughts in Mexico are overwhelming food banks," claims the author, Josh Harkinson. "In short, the valley is becoming what an earlier generation of refugees thought they'd escaped: an ecological catastrophe in the middle of a social and economic one—a 21st century Dust Bowl."

In falsely portraying the west side as "a 21st century Dust Bowl," Harkinson sounds here like a speech writer for one of Governor Arnold Schwarzenegger's rants for a rally of the Latino Water Coalition, an "Astroturf" organization set up by the Governor and San Joaquin Valley growers to put a "human face" on corporate agribusiness in order to promote the construction of a peripheral canal and more dams and to strip protections for Central Valley salmon, Delta smelt and other fish species under the Endangered Species Act.