Newswire
Calendar
Features
Home
Donate
From the Open-Publishing Calendar
From the Open-Publishing Newswire
Indybay Feature
Publish to Newswire
Add an Event
Related Categories: Central Valley | Environment & Forest Defense
Another Right Wing March and Rally for Water
by Mike Rhodes (editor [at] fresnoalliance.com)
Wednesday Jul 1st, 2009 8:21 PM
The Latino Water Coalition organized a march and rally for water at Fresno City Hall today. Fresno City officials estimated the crowd at between 3,500 -4,000. Farmers, farmworkers, and politicians rallied to turn on the pumps in the delta to irrigate the farms in the western Central Valley. Republican congressman George Radanovich (photo below) took the demand one step further, calling on eliminating at least one species of fish to get the water farmers say they need. 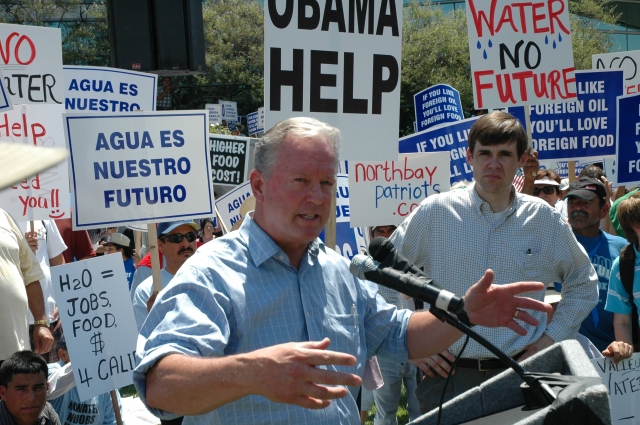 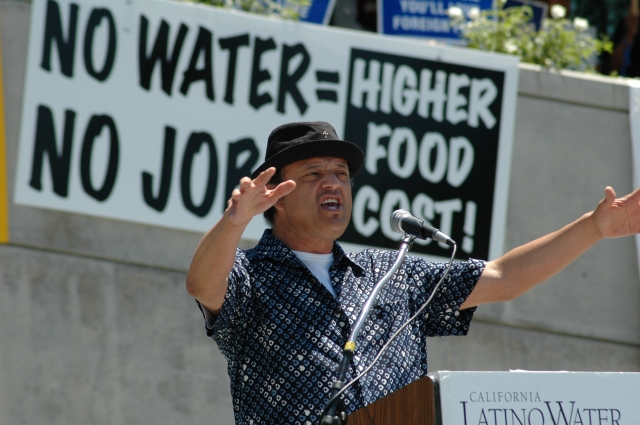 original image (3008x2000)
Comedian Paul Rodriguez, co-chair of the Latino Water Coalition, MC’d the event that took place outdoors on a day in 100 degree plus weather. Rodriguez has become the spokesperson for turning on the pumps and removing environmental protections aimed at saving the delta smelt, a small fish on the endangered species list. 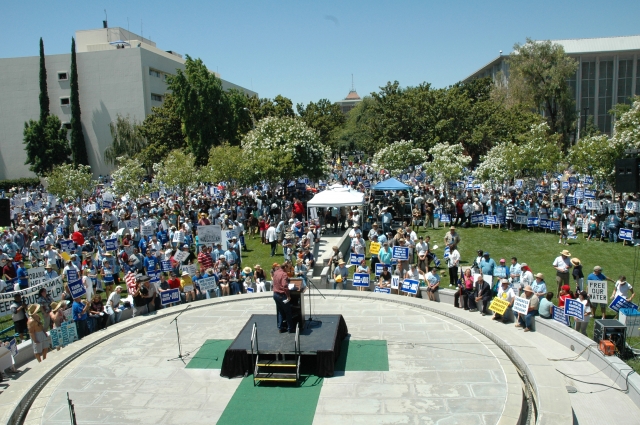 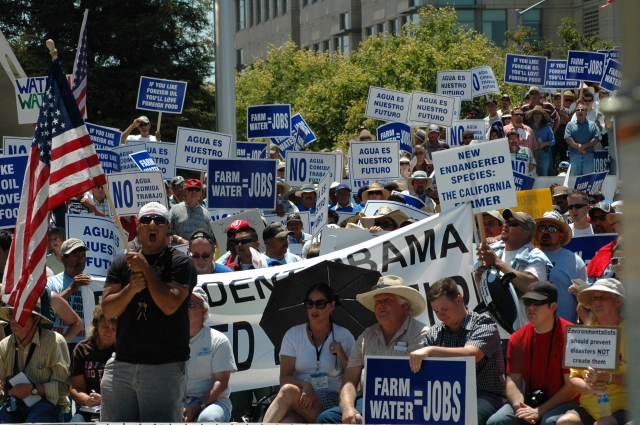 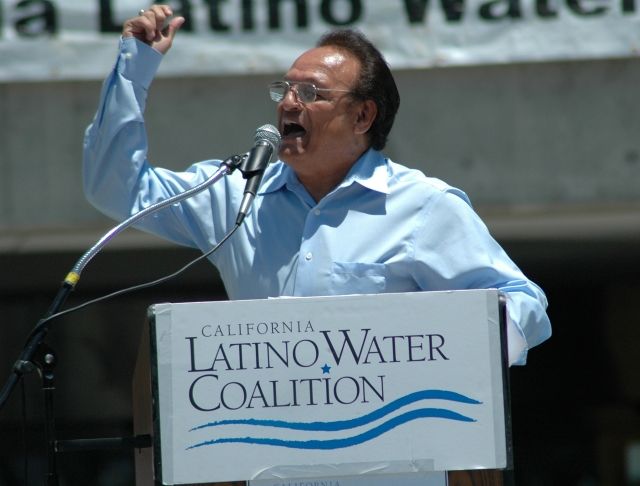 original image (2631x1998)
Orange Cove mayor Victor Lopez gave a passionate speech, mostly in Spanish, about why the pumps must be turned on in this battle between “fish and people.” 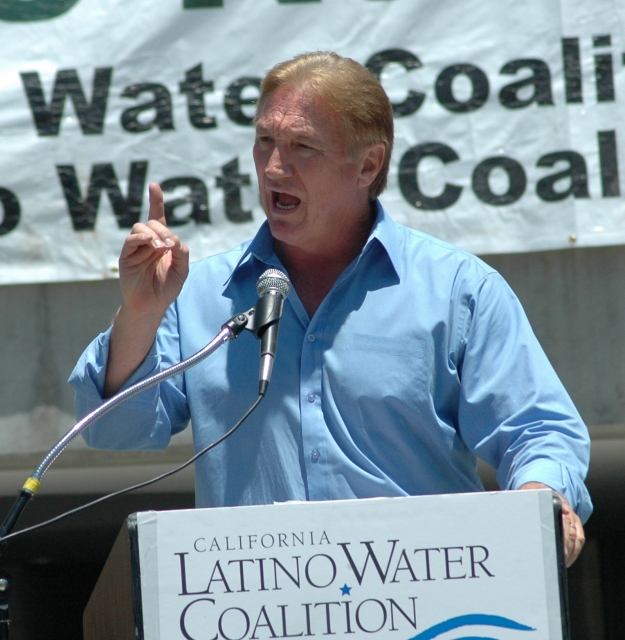 original image (1528x1563)
Former Fresno mayor Alan Autry said the efforts to protect endangered species were not helping the situation and called environmental activists domestic terrorists. Autry used Mendota, a small town in the Western Central Valley that has an unemployment rate of over 40% to make his point that those who would hold back the water are terrorists. 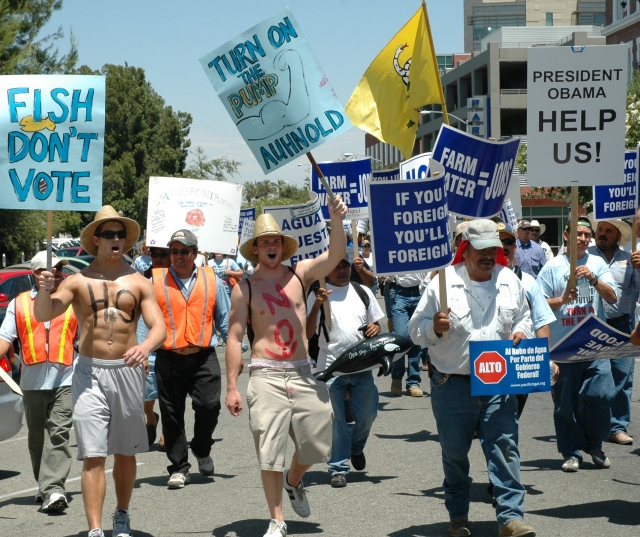 original image (2256x1896)
Following the rally, most of the participants, estimated at up to 4,000 by City of Fresno officials, marched through the downtown area. This march and rally follows the Town Hall that was held in Fresno on Sunday by Interior Secretary Ken Salazar. Salazar promised more attention to this issue, but proponents of turning on the pumps are demanding immediate action, including suspending the protection of the delta smelt. Environmentalists say the delta smelt are essential for a healthy river ecosystem.
http://www.indybay.org/newsitems/2009/06/2...
§Fish vs. People?
by Mike Rhodes Wednesday Jul 1st, 2009 8:21 PM 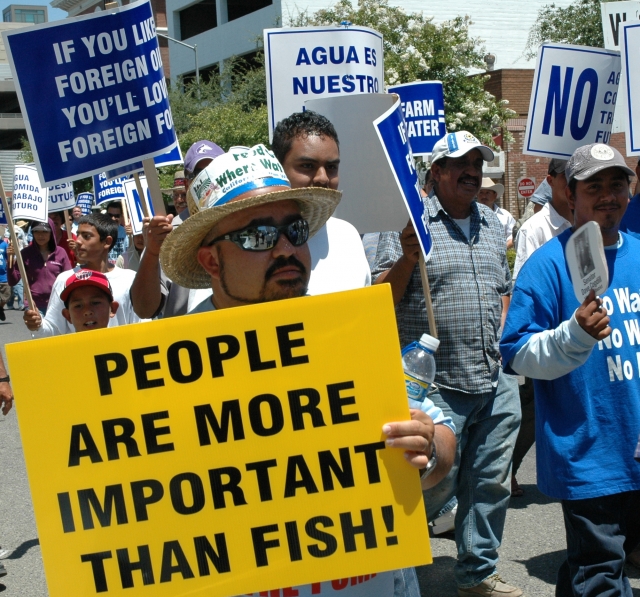