Photo: Governor Arnold Schwarzenegger speaks on April 17, 2009 at the so-called "Rally for Water," a rally organized by the Latino Water Coalition, an "Astroturf" organization set up by corporate agribusiness interests to promote the peripheral canal, more dams and the gutting of fish protections under the Endangered Species Act (ESA). 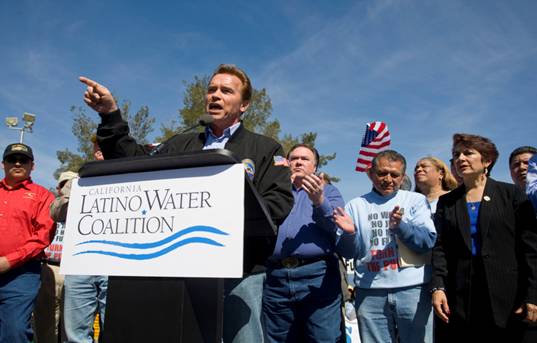 A poorly researched article on California water, the "New Dust Bowl," appeared in the November-December edition of Mother Jones magazine, a publication supposedly known for its investigative reporting. The "New Dust Bowl" sounds just like a headline from the Sean Hannity Show or Fox "News" - and the article (http://motherjones.com/environment/2009/11/new-dust-bowl) reads like a propaganda piece for growers on the west side of the San Joaquin Valley.

"On the west side of the valley, which is often last in line for deliveries from federal water projects, farmers are selling prized almond trees for firewood, fields are reverting to weed, and farmworkers who once fled droughts in Mexico are overwhelming food banks," claims the author, Josh Harkinson. "In short, the valley is becoming what an earlier generation of refugees thought they'd escaped: an ecological catastrophe in the middle of a social and economic one—a 21st century Dust Bowl."

In falsely portraying the west side as "a 21st century Dust Bowl," Harkinson sounds here like a speech writer for one of Governor Arnold Schwarzenegger's rants for a rally of the Latino Water Coalition, an "Astroturf" organization set up by the Governor and San Joaquin Valley growers to put a "human face" on corporate agribusiness in order to promote the construction of a peripheral canal and more dams and to strip protections for Central Valley salmon, Delta smelt and other fish species under the Endangered Species Act. “Astroturfing” is an English-language euphemism referring to political, advertising, or public relations campaigns that are formally planned by an organization, but designed to mask its origins to create the impression of being spontaneous, popular ‘grassroots’ behavior.

How can Mother Jones, "a bimonthly magazine of investigative journalism that exposes the evils of the corporate world, the government, and the mainstream media," according to its website, push the agenda of Governor Arnold Schwarzenegger, corporate agribusiness and right wing astroturfers and not quote anybody from the Delta or fishing communities? And what about Delta farmers and farmworkers that are threatened by water exports to agribusiness on the west side of the San Joaquin Valley?

This piece makes much of the corporate media reporting on the water issue, which leaves much to be desired, look "fair and balanced" in comparison. Mother Jones, the magazine's namesake, would be spinning in her grave if she saw how Harkinson accepted the agribusiness spin on California water politics and the lies of an Astroturf group such as the Latino Water Coalition as virtual gospel truth.

"In the 1930s, Okies saw California's Central Valley as a Garden of Eden. Now it's dying of thirst," claims Harkinson.

However, Lloyd Carter, who has written about California water issues for 40 years, points out Harkinson's contention that the San Joaquin Valley is a "dust bowl" and is "dying of thirst" has no basis in fact.

"There are four million acres of land in production in the San Joaquin Valley," said Carter. "The drought has idled 500,000, or one-eighth of the land. The Valley is hardly a dust bowl."

Harkinson uses dubious data in making his point about massive unemployment "caused" by the drought. "The drought is expected to dry up a billion dollars in income and 35,000 jobs, adding to a statewide unemployment rate that recently hit 11.9 percent—the highest since the eve of World War II," Harkinson states.

In contrast to the high figures that Harkinson cites, Jeffrey Michael, University of the Pacific economist, estimates that the San Joaquin Valley has lost 8,500 jobs from reduced water exports in 2009. "Roughly 2,000 of these are attributable to the endangered Delta smelt and the rest to the natural drought," said Michael (http://forecast.pacific.edu/water-jobs/Pacific-BFC-Water-Jobs.pdf).

Harkinson mentions nothing about the 23,000 people in the fishing industry now unemployed, according to economic data compiled by the American Sportfishing Association, because of the collapse of salmon spurred by massive water exports of Delta water to subsidized agribusiness and southern California.

I am surprised by the author's statement, in response to criticism of his article, that "What remains (of Westlands Water District ) is some of the most productive farmland in the world. Or was, before its water ran out."

"The smelt are a key food for salmon, which is why their preservation is more than a simple question of man vs nature," Josh Harkinson stated.

In reality, the smelt aren't a "key food" for salmon now, nor have they ever been. The Delta smelt is an indicator species that shows the health of the estuary, but are not found in the ocean where the salmon feed after migrating down the river as juveniles. (After I pointed this out on a post on the Mother Jones website, Harkinson did correct his mistake).

The only bit of truth I find in the article is where Harkinson says, "Cesar Chavez knew the power of a good march," Schwarzenegger declares, not mentioning that the United Farm Workers, which Chavez founded, boycotted the march, calling it a front for anti-union growers."

The next time Harkinson writes an article on California water, he should interview people like myself, Lloyd Carter, Bill Jennings of the California Sportfishing Protection Alliance, Barbara Barrigan-Parrilla from Restore the Delta, Zeke Grader of the Pacific Coast Federations of Fishermen's Associations and Mark Franco or Caleen Sisk-Franco of the Winnemem Wintu Tribe who know what's really going on in the Central Valley and in California water politics. It would also be a great idea for him to interview Arturo Rodriguez, the president of the United Farmworkers Union (UFW), or a representative of another farmworker organization before he subjects Mother Jones readers to the disinformation contained in his article.

Harkinson should write a follow-up article where he includes quotes and data from these sources about the agribusiness campaign to falsely portray the battle to save California fisheries and Delta/northern California farms as one of "fish versus people" when it is really one of people versus corporate agribusiness. Rather than taking the Astroturf information at face value as he has done, the writer should look at the real story behind what's going on in the Central Valley and the Delta.

For a larger perspective on this issue, read Lloyd Carter's impeccably researched law review article at:
http://www.ggu.edu/lawlibrary/environmental_law_journal/eljvol3/attachment/Carter.pdf. To learn about how Westlands farmworkers are being manipulated by the big growers and labor contractors, read "The P-R Firm from Hell," http://lloydgcarter.com/content/090629251_the-pr-firm-from-hell.
Add Your Comments
LATEST COMMENTS ABOUT THIS ARTICLE
Listed below are the latest comments about this post.
These comments are submitted anonymously by website visitors.