Governor's Office photo of Schwarzenegger campaigning for his water package at the Capitol on Friday, October 9. 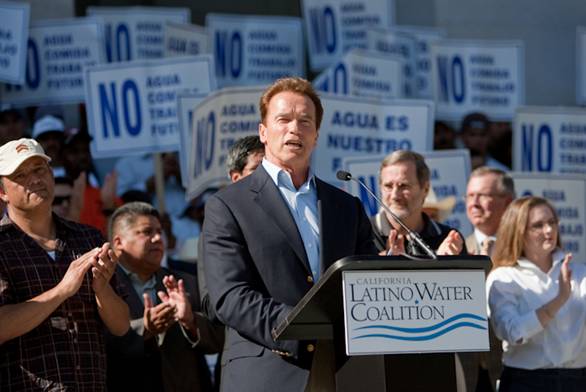 One of the great myths about California Governor Arnold Schwarzenegger is that he is just an ignorant actor, transformed into a politician, who is easily manipulated by his staff and corporate interests. This myth explains Schwarzenegger’s relentless campaign for the construction of the peripheral canal and more dams and the destruction of the Bay-Delta estuary as simply a case of the Governor being influenced by the wrong people.

Two well-respected environmental leaders repeated this myth about Schwarzenegger to me a year ago.

“Schwarzenegger isn’t evil like Bush,” one of them stated. “He’s ignorant and the bad guys – corporate agribusiness – got to him and his staff first.”

Actually, there is no basis in fact for this myth once one carefully looks at the Governor’s actions in office and the totalitarian manner in which he is now refusing to sign 700 bills on his desk unless the Legislature agrees to his demand to build a peripheral canal and more dams. As of this writing Saturday morning, the Governor and Legislators hadn’t yet agreed on any water package.

Unlike the “stupid governor” myth contends, Schwarzenegger isn’t easily manipulated – he is the guy that does the manipulating. The guy is extremely intelligent, shrewd and Machiavellian – and knows exactly what he is doing, unfortunately. Rather than being an ignorant stooge of corporate interests, he is a member of the corporate ruling elite who calls the shots.

Those that think that Schwarzenegger is just a “stupid actor” should get a video of the Gubernatorial Debate during the recall election of 2003 and watch the “Terminator" easily matching his wits with two of the best debaters in politics, Arianna Huffington and the late Peter Camejo.

And while some in the corporate media and corporate environmental groups still believe that he is the “green” Governor for his relentless grandstanding about green energy at press events and climate conferences, he is actually leading the charge by global corporations and agribusiness to destroy the California Delta’s fisheries and farms in order to supply increased water to Westlands Water District and Kern County through a giant canal or tunnel.

Schwarzenegger’s role as the master manipulator became painfully apparent yesterday when he spoke at an astroturfing rally by the Latino Water Coalition at the State Capitol to push for a water bond including a peripheral canal and Sites and Temperance Flats reservoirs.

Schwarzenegger’s office orchestrated the event, sending out press advisories the day before about his appearance and then mailing out three separate press releases the following day about the event, including a transcript of his speech and remarks by others, an audio link to the event and a photo of him speaking.

“The water package that we are negotiating is big, it’s historic,” Schwarzenegger told the crowd, with hundreds of farmworkers delivered in buses from Westlands Water District behind him holding signs including “Agua Es Nuestro Futuro (Water is Our Future). “And I can promise you that we are fighting for a comprehensive water package. I’m fighting for cleaning our groundwater, I'm fighting to restore the Delta and its ecosystem and I'm fighting for above-the-ground and below-the-ground water storage. Exactly, which we need so badly.”

“And I'm fighting to rebuild our crumbling water system and of course, most importantly, also to get more water to the desperately needed areas, which are our businesses and our homes and our farmers here in the state of California,” he continued.

He then praised the organization that “sponsored” the event, the Latino Water Coalition. “So before I go back inside the building and continue negotiating I just want to say thank you to all of you and how grateful I am, especially to the Latino Water Coalition. Let’s give them all a big, big hand for the great coalition and for the great work that they have been doing," he gushed.

Of course, Schwarzenegger never mentioned the fact that the Latino Water Coalition, portrayed as a “grassroots group,” is really a front for corporate agribusiness that the Governor helped to organize!

“The California Latino Water Coalition, often described as a grassroots group representing the Latino community, was born in a closed-door meeting of Gov. Schwarzenegger and local officials at Selma City Hall on March 21, 2007—and was ‘suggested’ by the governor himself, according to a coalition brochure,” disclosed investigative reporter Malcolm Maclachlan in his article in the Capitol Weekly on October 8 (http://www.capitolweekly.net/article.php?_c=ybqjr806of15fh&xid=ybopgxc5lelik7&done=.ybqjr806ofk5fh).

They also enlisted Burson-Marsteller (BM), the "public relations firm from hell," to promote their misinformation campaign claiming that San Joaquin Valley agriculture faced immediate disaster caused by court-order pumping restrictions to protect a "two inch minnow" (http://www.lloydgcarter.com/content/090629251_the-pr-firm-from-hell). Of course, they neglected to mention that valley agricultural jobs had actually grown over the past two years while the collapse of Sacramento River salmon fisheries, spurred by record water exports to subsidized agribusiness, had resulted in the loss of 23,000 jobs on the California coast and in the Sacramento Valley!

Mark Franco, headman of the Winnemem Wintu Tribe, yesterday condemned Schwarzenegger’s hypocrisy and use of the astroturfing strategy – a strategy that is designed to drive a wedge between American Indians and farmworkers, farmworkers and fishermen and farmworkers and environmentalists. The Winnemen Wintu have played a leadership role in the battle to stop the raising of Shasta Dam and the construction of the peripheral canal.

“I'm really glad that the governor has such a close relationship with his hand picked group of ‘needy people’ (Big Business, Big Agriculture and D-List Celebrities),” Franco quipped. “I only wish he would stand with the tribal people of this state who continue to be pushed to the back of the line at the bus stop...as we can't even get on the bus.”

He emphasized, “He may be touted as presiding over the ‘birth of the Latino Water Coalition’ - who apparently don't have to drink the water in Ducor, California, but to us he is Dr. Mengele presiding over the death of California Tribal water rights and lifeways. He will be long remembered by traditional Indians as the one who refused to listen and caused the death of our Mother.”

“When will he meet with us, when will he listen to us, when will he talk to us?” asked Franco. “I fear he never will; his ears are full of the cotton grown in the desert and his mouth is full of his own ‘government created dustbowl’ dust!”

“Water is a fundamental resource essential for a healthy population, environment, and economy,” the letter states. “Without equitable and sustainable management of California’s water resources we face an uncertain future particularly in the face of climate change. At stake in all of this is the fate of the Bay-Delta ecosystem – the most important estuary on the west coast of both Americas…The biological significance of the Bay-Delta is unparalleled.”

While Schwarzenegger, the Latino Water Coalition and other astroturfers aim to destroy the tens of thousands of jobs provided by Central Valley fisheries and Delta farms by campaigning for the construction of the peripheral canal and increased water exports, Restore the Delta and the other 23 groups are working to create a “water system founded on a sense of stewardship and responsibility for the precious water resources we are privileged to have” and based on environmental justice.

To view the recommendations and a copy of the letter with the complete list of organizations, please visit http://www.ejcw.org/10-8-09%20Coalition%20Letter-1.pdf

For more information about Schwarzenegger’s war on fish and the environment, go to: http://www.alternet.org/water/142891/schwarzenegger_celebrates_%27green%27_policies_as_he_wages_war_on_fisheries_and_waterways/