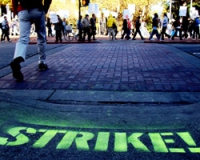 In anticipation of fee hikes, students planned a series of occupations and strikes across the state for November 18th through 20th. On Thursday, November 19th, the University of California Regents approved a 32% increase in undergraduate fees, pushing fees to over $10,000 a year for the first time. Student Regent Jesse Bernal was the only vote in opposition. Protests, sit-ins and occupations took place at UCLA, UC Berkeley, UC Santa Cruz, UC Davis, CSU Fresno, San Francisco State and San Francisco City College. Students occupied Campbell Hall at UCLA, Kresge Town Hall and Kerr Hall at UC Santa Cruz, Mrak Hall at UC Davis, Wheeler Hall at UCB, and the library at CSU Fresno.

At UCLA, there were uncounted incidents of police violence against students during the three days of protests while the UC Regents held their meeting on the UCLA campus. LA-IMC reports confirmed use of tasers, pepper spray and much baton use on peaceably assembled students.

A total of fifty-two students were reportedly arrested at UC Davis on Wednesday. On Thursday, students occupied Mrak Hall, and were later arrested for trespassing. On Friday afternoon, students sat-in at Dutton Hall and were dispersed by police that evening.

On Wednesday, students at SF State staged walkouts, and at least 100 students took over the administration building and occupied it beyond closing time.

In the early hours Friday, about 40 people occupied Wheeler Hall at UCB — three were arrested as police arrived. Solidarity crowds outside grew throughout the morning. As metal barricades were set up by police, police beat demonstrators with batons, including smashing one woman's hand which required surgery. At least one demonstrator was shot with a rubber bullet. Occupiers voluntarily left the building with misdemeanor citations in the evening. That same evening, students at CSU Fresno occupied Madden Library and held it overnight.

On Wednesday, hundreds of students rallied at the two entrances to the UC Santa Cruz campus, shutting them down for several hours. Also on Wednesday, students began an occupation at Kresge Town Hall. On Thursday, students occupied UCSC's main administrative building, Kerr Hall. Both occupations ended on Sunday morning after UC Police and Santa Cruz County Sheriff's Officers dispersed the people outside of Kerr Hall and those occupying the building.

On Monday, November 23rd, about 100 students flooded the office of UC headquarters in Oakland to demand a meeting with UC President Mark Yudof.

Previous Related Indybay Feature: A Call for Days of Action Against the Tuition Hikes