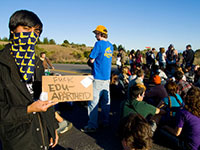 On November 18th, hundreds of students rallied at the two entrances to the UC Santa Cruz campus, shutting them down for several hours. The demonstration was in conjunction with statewide actions against a 32% increase in undergraduate student fees, effective fall 2010, which was approved the same day at UCLA by the Committee on Finance of the UC Board of Regents.

Previous Indybay Coverage: A Call for Days of Action Against the Tuition Hikes | Study-in at UCSC's Science and Engineering Library